Weather: Mostly cloudy to obscured with several inches of new snow accumulating throughout the day. The Kebler wind funnel was doing its thing down by the road, but I was surprised by the light winds at higher elevations. The northwesterly winds then increased as I started moving out of the upper end of NTL elevation into more ATL. Plenty of snow moving at upper elevations and on cross-loaded terrain closer to Kebler Pass.

Snowpack: I found less wind-affected terrain than I had expected. Upper elevations and the wind funnel down Kebler Pass RD were the main exceptions. Where there wasn’t wind effect, there were a number of loose snow avalanches. If you pushed into steep terrain I would expect soft storm slabs could have been triggered, and with the impressive new snow amounts I was concerned about deeper persistent weak layers. Most of my digging ended up on southerly facing terrain. In a profile on a BTL SE facing slope, SH was just under 35cm’s of recent snow and more concerning was the mid-pack persistent slab where a soft crust was capping weak faceted snow. Moving to an above treeline southerly facing slope that didn’t have wind-loading, the HS jumped up dramatically, but the end result was the same mid-pack persistent slab set up.

I was hunting for obvious signs of instability. In the end, I didn’t find much while traveling through tons of terrain. The main issue was probably that I didn’t touch wind-loaded terrain or steep slopes over 35 degrees as they seemed to have obvious and potentially dangerous avalanche problems. 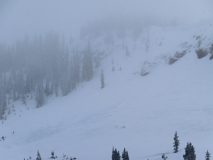 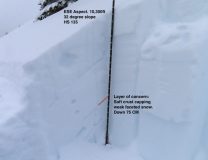 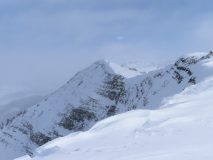 Scarps Ridge had clear wind-loading from NW winds. This picture shows the northerly side of the ridge getting stripped of snow and the southerly side getting loaded. 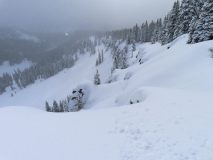 Example of no wind effect on the new snow at 11,500ft behind a wall of trees. 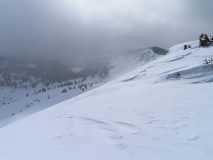 Example of obvious wind-loading just up the ridge from the last photo.