Two fresh avalanches were visible on Mt Owen. Could not see crowns, but presume them to be wind slabs. Estimate to be D1.5.

Weather: Brrrrr it was a cold morning out there . Winds were light with moderate gust out of NW at treeline. Small amounts of transport were happening during tour.

Snowpack: Kept moving through out the tour to stay warm, but performed at couple quick test at surface. In two locations, on at 10,600 and 11,000, both NE aspects and open meadows I found buried surface hoar about 10cm down.
Other notable finds were drifts up to 14″ deep immediately below ridge top on south/southeast aspects. Stomping just below ridge top produced minor cracking, approx. 5 feet. Ski cut same slope on way down without any result. Drifts dissipated quickly as you moved down slope. There were several large drifts at the ridge top that were 18″ deep or more, got one to collapse with three people standing on drifted whales at ridge top which caused a small fresh cornice to break onto a southeast slope. 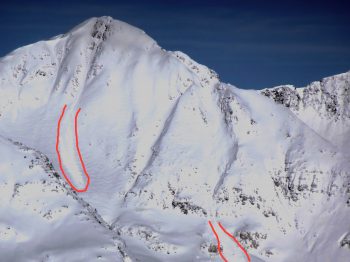