Weather: Showery most of the day, with a significant pulse of snow from 10am till early afternoon.  Storm total ~10″ snow, with .8″ SWE.
Snowpack: Went looking to see if the Jan 20th interface would reactivate under the weight of a new load. Turns out the Jan 20th interface wouldn’t be our concern.
Found radically different structures between slopes that had and had not avalanched. We dug in 2 slopes that had not avalanched, which gave us information that we misapplied the slopes below, which it turns out had avalanched previously and had much different structure.
First, went to look for 1/20 interface in a deep spot with light drifting near treeline. Northeast aspect, 11,200′. HS 240cm. ECTX, with slab fractures within in the new snow. No concern at the 1/20 interface, down 50cm.
Second, went to look for changes to 1/20 interface within 10 or 15′ of a skier triggered avalanche from last week. Northeast aspect, 11,100′. HS 140cm. ECTX, with slab fractures within the new snow. No concern at the 1/20 interface, down 50cm.
Third, dropped into a slope that we believed had not avalanched this season, expecting to trigger a shallow storm slab in the new snow. A little ways down the slope, at the first significant roll-over, one skier placed a hard cut and triggered D1.5 slide, about 50cm deep. The hitch was the total HS was only 80cm. This slope had slid before, leaving a dramatically different 1/20 interface, with much, much, much weaker snow. There was no visual indication that the slope had previously avalanched, and only a change in feel underfoot right at the point of the avalanche.  After the first skier moved to safe ground, a second skier came down near the first track and remotely triggered (15′ away) a much broader avalanche in steeper adjacent terrain. Same structure, the slope had slid previously. At that point, both skiers skinned back to the ridge, opting to avoid this unexpected change in conditions and revert to the great snow on the lower angles sunny slopes.
Big lesson learned – thinking we were digging and looking for one problem, we found another problem, that was far touchier and broader propagating than expected. We were trying to figure out and find the weak layer responsible for the avalanches triggered a week before, which had been described as “wickedly touchy.”  Our evidence in profiles very close to the prior avalanches didn’t match what we expected to find, nor the prior reports.  Turns out we were in a completely different snowpack, because they were several feet outside of previous avalanches.  When the evidence doesn’t match the report (of touchy conditions recently) consider the weirdness as a sign of uncertainty – proceed with caution.  Fortunately, our habits of skiing the less exposed lines payed dividents, though it was too close for comfort.
Bottom line – head’s up, the slopes that avalanched in the Holiday cycle, or the early January cycle have reloaded in the deeper snow zones around Paradise Divide, and they may react much differently than the adjacent terrain with an intact full-season’s snowpack. 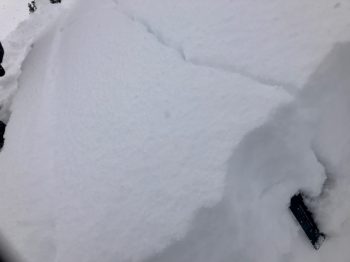 shooting cracks in the storm snow on an east aspect at treeline. 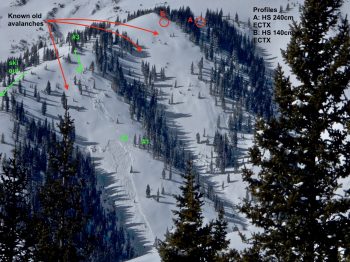 detail of the avalanche scene. Skier 1 triggered small slide and posted up at #1 mark. Skier 2 then remote triggered from #2 mark. Skier 3 remained on the ridge. Skiers 1 and 2 skinned back up and the group exited via the ridge. 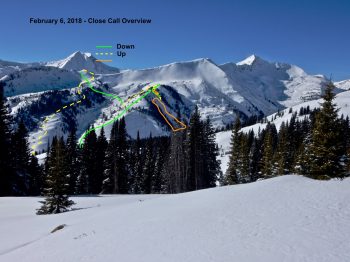 Overview w/ down & up tracks, plus avalanche locations. 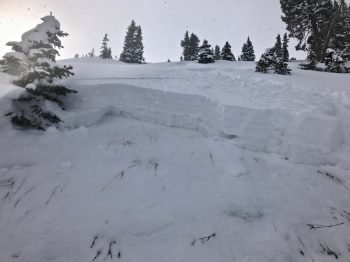 crown of a repeat performer, in this case the D1.5 triggered higher on the slope. 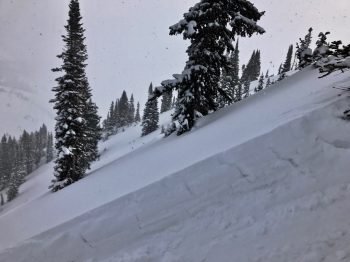 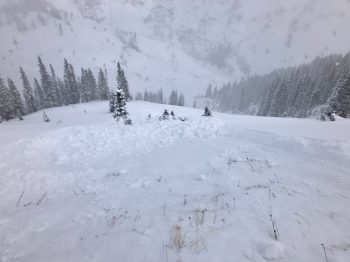 Looking down the first D1.5 slide triggered on the first cut. The second slide was triggered from the horizon line below, into steeper terrain down and right. 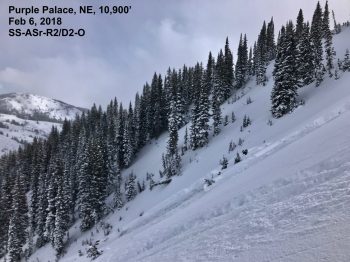 the larger, remote triggered slide, which propagated around 200′ across the slope and ran 800′ vertical to the exit bench. 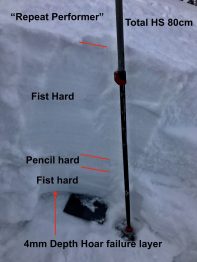 the structure from the repeat performer paths. The 4mm Depth Hoar was exceptionally weak and old bed surface exceptionally slick and firm from repeated avalanches. 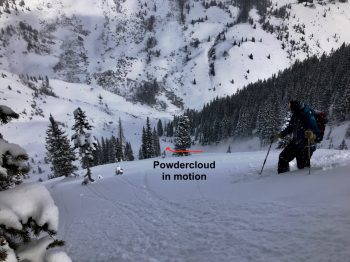