Observed avalanche activity: Yes
Avalanches: No surprise, lots of activity everywhere at virtually all aspects and elevations, both old and new. We assume our snowmobiles remote-triggered a small wind-loaded pocket (E), around 75 yards adjacent to an open hillcrest (picture attached). Lot’s of debris visible on some Westerlies but East seemed to be the bigger instigator (no surprise with the winds). Didn’t get eyes on many N aspects. Topped out on a SE/ E facing slope which looked to have ripped mid-cycle.
Weather: Sunny and very light winds BTL. Applied the whitey sauce a couple times but still proved to be insufficient. Wasn’t extremely warm but the solar was certainly in play. Felt like early spring for sure.
Snowpack: Not nearly as much new snow as some of the favored areas, at least at the lower elevations. However, it was certainly noisy whilst breaking in the skinner, so we kept it mellow and stayed below 30ish degrees all day. Stomped on a couple suspect slopes and had some big collapses, but we weren’t on anything steep enough to move any kind of slap. Overall, snow on S and SE felt pretty good. Worth noting: there were a couple big debris piles near valley floor on steeper E aspects a little further up the valley… Around 11am, the new snow was beginning to get heavy on the sunnies and continued to get baked throughout the day. One would assume a varying sun crust should be expected at this aspect and elevation tomorrow. 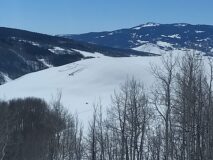 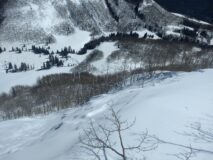