Avalanches: By 11am the east side of Gothic Mountain came alive and produced frequent loose wet avalanches from steep, rocky east-facing terrain near and below treeline. There was loose activity every few minutes for several hours. Most were D1 in volume but one D2 was able to accumulate mass on a below treeline slope that had yet to produce much loose activity this spring and pushed debris down a gully into an impressive pile at valley bottom, ran at 1pm. (see photo).

Weather: Very warm with clear skies until 3pm when clouds and virga started to push into the area. Winds were absent at valley bottoms.

Snowpack: Spent the day near valley bottom at 9500′. Crust were 4 or 5 inches thick in the moring and by 1pm they had broken down enough that boot penetration was basically to ground or as long as your legs would allow.

Around 315pm crossed several northeast and east-facing slopes, 9500′, and found that some slopes were unsportive to skis at times with minor collapsing of the barely intact crusts. More northerly slopes had intact slab structure where as east was just a broken down crust sitting on wet snow. 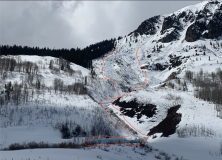