Avalanches:
Weather: Overcast sky. Light to Moderate westerly winds drifting snow at ridgeline.
Snowpack: Traveled in this same area on 12/3. Measured HS at the same location as on 12/3. At 11,300ft, south aspect HS was 90cm. That was a 10cm drop since the last time I was there, but more snow has also fallen during that time so the drop would have been greater, compared to the unmeasured peak snowpack hight. Ski pen had decreased and the upper snowpack had gained strength in those couple days. On southerly facing slopes, our group of three observed no obvious signs to instability regarding a persistent slab issue. Put some hard ski cuts on a few southeast slopes as well, but otherwise chose to avoid skiing on those slopes.

At the near treeline elevation, near the ridge, there had been a good amount of wind-loading over the last few days. Pervasively northerly winds had loaded some good sized drifts over the top of the ridge, while today the westerly winds were cross loading the rips in the terrain. The drifts were thick to ski through, but didn’t budge under a few ski cuts. Still managed the terrain off the ridge with windslabs in mind.

On easterly facing slopes BTL, the obvious signs to instability had greatly decreased since 12/3. The PS structure was still there, but we were not getting the shooting cracks and booming collapses as often. Still chose to avoid slopes greater than about 32 degrees in this area. 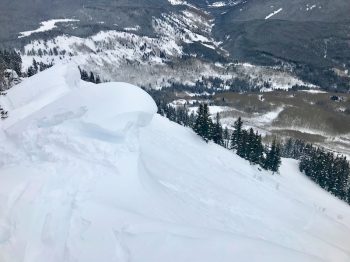 Fresh Drifts loading a south aspect at ridgeline. While todays winds were cross-loading snow across the ribs in the terrain. Plenty of fresh snow to move around.