Skier triggered a very small surface slab just off a high summit and some sluffing. All easy to manage and small in size.

The outlier: I came across a freshly triggered very large avalanche on the way home. S to SW aspect at about 11,800ft. A snowmobile track entered and exited this very large avalanche. The track appeared to go through a thin spot in the slab near some bushes and raised ground. The track further appeared to have splatted on the crown face but had enough momentum to keep going up. I checked out two parts of the crown that were near where the snowmobile track exited. The first was to the lookers right. HS was thin and about 80cm. Basal depth hoar was massive and estimated at 5mm. An ice lens capped these facets and they were also moist. The next quick crown profile was closer at about 20 ft to the looker right of where the track exited. Here HS was 180cm. The crown was 90cm. The basal facets where smaller, also moist and again an ice lens capped these facets. The avalanche appeared to have failed at this ice lens or at the interface with the basal facets. Shortly after getting to that location water started running like a faucet out of the new/old snow interface and I quickly packed up and left. Slope angles were estimated to be near 40 degrees where the snowmobile track left the crown. Crown hight averaged an estimated 70cm. The crown appeared to propagate into a deeper snowpack area.

Snowpack: The March sun was doing its thing and warming snow surfaces. Storm totals were only about 1″ down in the valleys and about 5 to 6″ at upper elevations. The new snow posed little avalanche issues. Sluffing in steep terrain and some deeper drifts to stay mindful of. 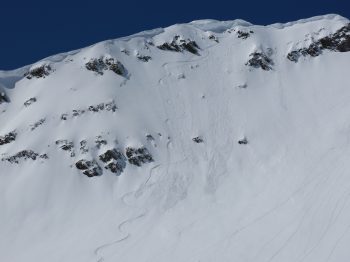 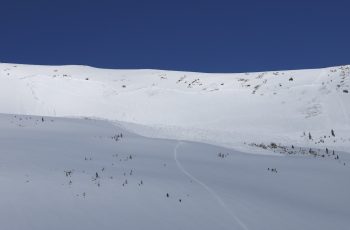 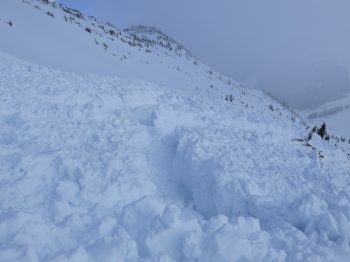 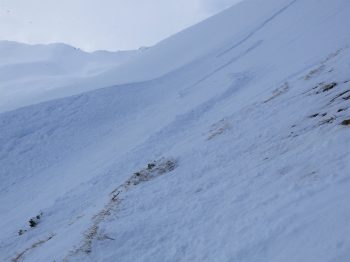 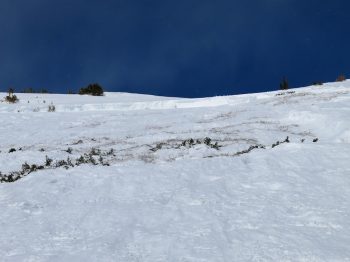 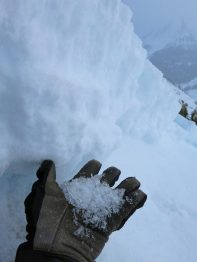 Large Grained DH in a shallow part of the crown 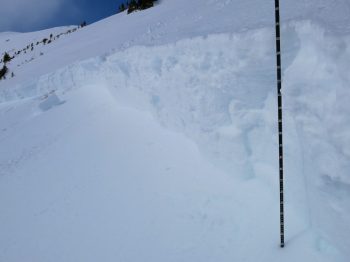 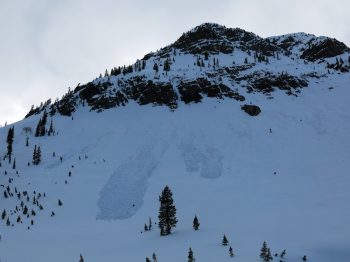