Avalanches: Good visibility looking at northerly aspects of Scarp Ridge, Schuylkill Ridge, Coneys, and E/N aspects of Ruby Range. Flat light looking northeast towards the Elk Divide. Not much for fresh avalanche crowns (See photos). Saw one D3 on a NW aspect ATL of Scarp that failed near the end of the storm, and couple of other partially filled in crowns. Subtle evidence of some very large avalanches that ran sometime during the storm off of Gothic, but the crowns are completely gone now, so can’t classify the avalanches. U-N-R4-D3-U debris piles below the Spoon (S aspect), SW gulley, and Spork (SE aspect). The one below the Spork looked to be at least 20 feet deep (D3.5?), and was a couple hundred yards or less from hitting Gothic Road. This could have been the combined pile of multiple slides. From my vantage, I didn’t see any debris piles that ran R5 or max runouts.
Weather: Thin broken clouds. Calm winds, mild temps. S-1 around sunset.
Snowpack: HS on SW aspects NTL was variable, from 240 cm to less than 100cm. The New Year’s crust was generally 150-200 cm deep, easy to ID with probe. I targeted a thin spot to dig and found advanced depth hoar below the crust, CT SC results, but didn’t propagate in 2 ECTs because talus interrupted the continuity of the layer in that spot. On SE aspects ATL, I probed into two adjacent starting zones. One had HS of 300 cm, the other had HS of 150 cm. Although the crown was no longer visible the latter had clearly run sometime during the storm (probably on mid storm layers?) and you could see debris in the flats. I dug into that slope and found about 120 cm slab over 4F 1.5mm facets, still surprisingly unsintered. On Snodgrass (E/NE aspect BTL), HS was 280 cm in start zones. Snow surfaces became moist on southerly tilts at lower elevations, and formed a thin, soft crust. Traveled on various aspects with no signs of instability except shallow but long running sluffs. 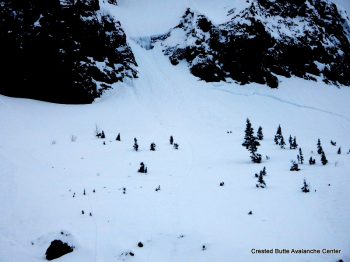 East aspect NTL on Gothic. Looks like maybe a larger crown that was filled in, because I couldn’t make out the debris. 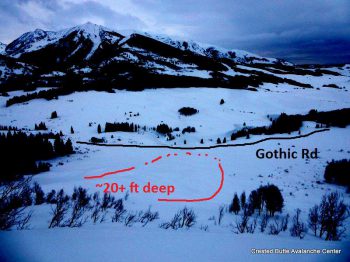 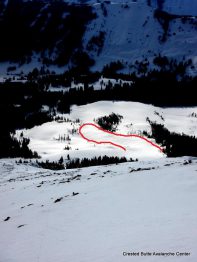 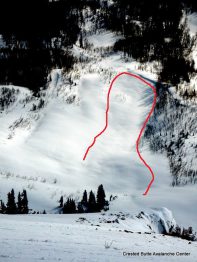 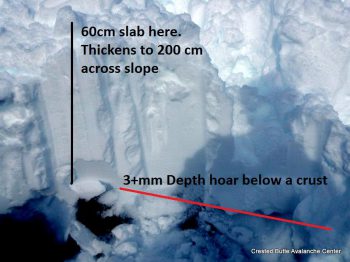 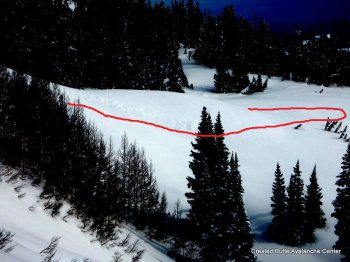 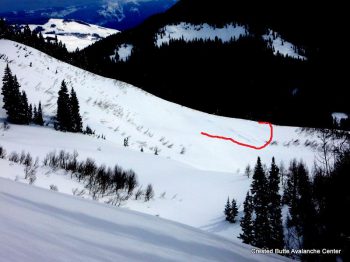 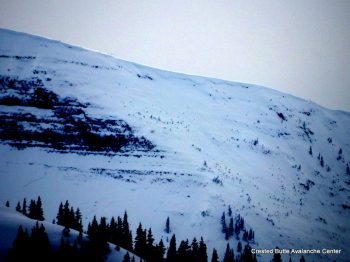 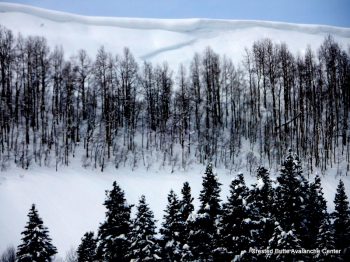