Snowpack: This observation was shooting for some random places that may be a shallower snowpack would speak up. Not too much ligament avalanche terrain traveled, with slope angles reaching up to 35 degrees. HS varying between 150 to 280 on the aspects and elevations traveled. No obvious sings to instability.

NNW Crown Profile at 9,300ft. This was a steep 38-40 degree, wind-loaded slope. Appeared to have too much snow on the bed surface to have failed in the last couple days, so likely failed during the storm previous to 3/11. Crown was about 110cm and failed in small 1mm faceted grains that were 1F hard, about 30cm off the ground. Traveled on a similarly loaded slope with no obvious signs to instability. Maybe just needed to find a trigger point?

Crown Profile on SW aspect at 10,900ft. A very large avalanche had run off the southwest to west side of Double Top South. This avalanche had gouged out additional crowns on the flank of its avalanche path. This crown profile was mid-track on a southwesterly aspect. In this area the avalanche appeared to fail about 25cm’s off the ground in small faceted grains, just above the large 1F depth hoar. CT and informal tests produced no results. The bed surface of the avalanche had about 35 to 45cm’s of new snow on it. I couldn’t identify the crowns in the upper start zone, partly due to visibility and partly because they have filled back in. 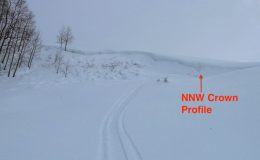 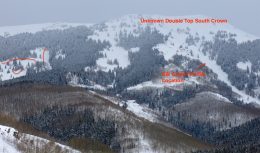