The storm yesterday panned out as expected, with a sharp cold front, periods of moderate snow, and accumulations around the area mountains in the 4-8” range, with largest snow totals in the Kebler Pass area.  Northwest winds were blustery, and backcountry travelers should be prepared to encounter wind drifted snow in the 1-2 foot range above treeline.  Much of this snow is falling on dirt, but if your motivation is high, and find yourself in the highest elevations of our backcountry, tread carefully on northerly facing slopes that do hold a surprisingly continuous layer of faceted snow from our late October and early November storms. These close calls from years past ( Mt. Owen and Mt. Baldy ) exemplify avalanche concerns during the fall. The sun should melt much of this storm snow on east through south through west facing terrain before our next storm arrives early next week, but its safe to say you can count this storm as the official start of winter.  Game on.

You won’t see me out there on skis quite yet, there is too much season to lose and the snow is just too shallow.  The risk vs. reward just ain’t there yet.  Spend these days in winter purgatory waxing those boards, registering that snowmobile (don’t blow it off… its easy!), checking those transceiver batteries, and even doing some rescue practice.  Look for periodic updated advisories from the CBAC as the early winter snowpack accumulates.

After 30-40mph winds accompanied the falling snow on Thursday, shallow windslabs up to 2 feet deep are possible near and above treeline.  This time of year, wind loaded bowls and gullies collect the snow, pushing us to those features to ski and ride because that is where there’s enough depth to float us over the rocks and dirt. Beware these same features hold potential slabs that are large enough to knock you off your feet or take you for a ride.  Use extra caution and consider the terrain consequences if you encounter wind drifted or slabby snow in couloirs, below ridgelines, or below fresh cornices.  These slabs are more likely to slide on pre-existing snow layers. See this observation and this video.

We did not pick up quite enough snow to make storm slabs an issue, but depending on snowfall rates and amounts during upcoming storms, instabilities within the new snow may develop.  Again, these are most likely to slide on pre-existing snow surfaces: the highest, shadiest aspects right now.  Monitor new snow amounts, look for signs of slabbiness, cracking snow, or sluffing, and consider the consequences of even a small avalanche if you are traveling in steeper terrain.

Snowfall from earlier this fall has lingered and formed crusts or facets on some northerly aspects near and above treeline.  This old, rotting snow can act as a persistent weak layer beneath future slabs.  As the snowpack gets deeper with additional storms and windloading, persistent slabs will begin to develop over these faceted layers.  Persistent slabs may be larger and can propagate unusually wide distances.  Often times the slopes that are most attractive to skiing or riding this time of year hold the most problematic snowpack.   Monitor the changing structure of the snow in your travels, and be wary of slabby snow over facets or sugary snow. Collapsing and cracking are signs of instability, warning you to change aspects or stay off of terrain steeper than 35 degrees.
The CBAC will continue to monitor the snowpack this week, it looks like another storm carrying a decent amount of moisture swinging out of the desert Southwest around Tuesday, and another potential storm late next week for the Thanksgiving holiday.  The next travel advisory will be posted November 22nd.  Daily avalanche advisories will begin late November, or as conditions warrant. 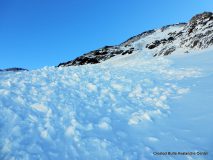