-2 small wind slabs ran naturally on Thursday near Taylor Pass
-2 large wet slabs ran naturally, likely on Wednesday, on a SE bowl of Leahy Peak (on the Aspen side of the divide). They failed near the ground, probably triggered by water draining into basal weak layers near rock outcrops. The debris looked fairly wet, I suspect the slabs were a mix of dry midpack, wet on the surface.
-1 recent persistent slab on Carbonate Hill, triggered by a cornice fall, likely during the warmup on Tuesday or Wednesday
-1 small loose wet ran near Star Peak on Tuesday.
-Dozens of previously undocumented large persistent slabs (up to D2.5) that ran mid-February or from subsequent wind events at all elevations and aspects.
Weather: Warm and sunny most of the week. Thursday brought 3″ of snow and gusty northwest winds. Back to warm and sunny on Friday.
Snowpack: Spent the last five days on a hut traverse in the upper Brush, Cement, Castle, and Tayler drainages. No signs of persistent slab instabilities underfoot, such as collapsing. Winds during the later half of February have heavily redistributed the snowpack above treeline; quite a bit of scouring, even on some leeward aspects, while some areas have a hard, thick snowpack with basal weak layers down 150 to 200 cm. In shallow areas at higher elevations and on most below treeline slopes, slabs have generally faceted away.
Snow surfaces are mix of sastrugi/windboard ATL, facets on shady BTL aspects, and melt-freeze crusts up to a few inches thick on the southern 2/3 of the compass. All of this was buried by about 3″ of snow on Thursday. We also noted small-grained surface hoar that formed last night at all elevations. 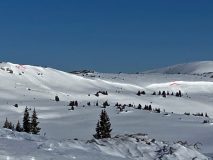 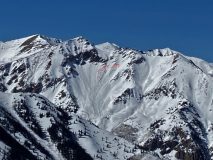 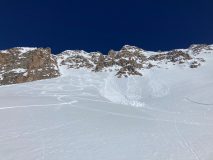 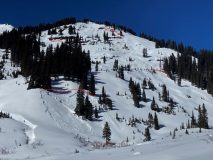 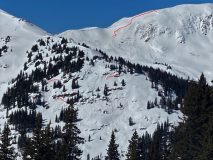 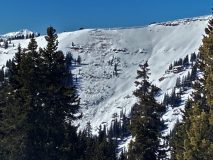 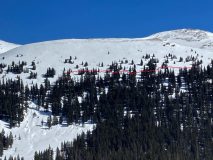 This older crown on Hunter Hill (west aspect) is worth sharing because it ran in terrain that might not look like obvious avalanche terrain.