Weather: Down Valley Winds were just strong enough to continue drifting snow through the low elevation corridor. While sky remained in the partly cloudy realm and temperatures were cold.

Snowpack: Cruised across some low elevation start zones facing northeasterly and easterly. Previous wind loading at these lower elevations felt concerning enough to consider today and was apparent with the train management of the previous tracks in the area. Though an avalanche failing in recent snow or in old snow layers both appeared stubborn. Those previously wind-loaded start zones held the strongest looking snowpack. A Wind Slab on wind-board on more wind-board with some weak layers sandwiched in-between. It appeared that a large loading event would fail in the upper snowpack layering or within the new snow, then step down below the wind-loaded terrain into the weaker snowpack below. It didn’t really matter, there is a weak snowpack structure and new avalanches will fail or step down into it with either a rapid or significant load. The most significant weak layer found in this terrain was on an easterly facing slope. Here a thin crust at the old snow surface was sitting above much weaker snow below. Hand pits easily produced results below this crust with the more recent snow riding along. On southerly facing slopes the most recent crust was supportive to both skis and snowmobile, and the next loading event would likely fail above this crust. 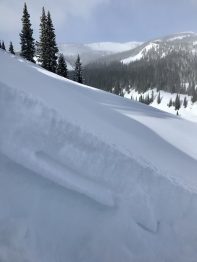