Avalanches: Observed a handful of recent (past couple days) Wet Loose avalanches on southerly and east aspects near treeline. Most came from rocky areas or locations immediately below cornices. The largest one came from a south aspect on flanks of WSC Peak, D1.5-D2ish in size. Most other Wet Loose avalanches were very small. Far less Wet Loose activity in Cement and Brush Creek drainages than Kebler Pass and Paradise Divide areas.

Lots of small to moderate recent cornice falls on east through south aspects without result.

Weather: Partly cloudy skies to start the day with increasing cloud cover. Winds from the southwest were constant near and above treeline. Speeds never pushed much above 20mph.  Some snow continues to be transported to easterly alpine features.

Snowpack: Made targeted obs on shaded slopes near treeline looking at Persistent Slab structure. The upper 35cm of the snowpack had two interfaces of interest that presumably formed during the past few weeks. In the shallower, minimally drifted, sites we dug at produced ECTN results. The lower of these two interfaces is a soft melt/freeze crust with a thin layer of facets above the crust much like other parts of the range. The faceted grains were about 1 – 1.5mm in size and showed signs of rounding. The middle and lower snowpack has gained a substantial amount of strength over the past month. The oldest Depth Hoar near the ground was 1finger hard with substantial rounding. The one interface of interest in the lower snowpack did not produce any results in CT or ECT even when hammering until my hand hurt, but would pop when the column was pried with a shovel. See photo 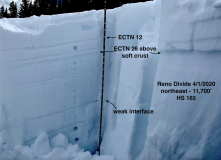 Test profile from near Reno Divide.