Observed avalanche activity: Yes
Avalanches: A couple of harmless wet loose sluffs on the SE side of Purple Peak ran today.
Weather: Light winds and minimal snow transport. Clear skies. Mild temps.
Snowpack: We know the north half of the compass is going to be trouble with our current weak layers. Today’s objective was to get a pulse on the near-surface weak layers on the southern half of the compass before the storm. In general, there are two layers of concern worth monitoring on the sunnier aspects.
1) The prolonged dry spell layer is well developed, quite weak, and fairly uniform across all aspects (typically 1.5 or 2.0 mm in size), below one or several sun crusts. The saving grace is that these crusts are thick and strong on the most southerly facing slopes. Crusts become thinner, softer, and more collapsible somewhere around ESE and WSW. There are quite a few variables contributing to crust thickness; in general, the crusts are thicker on steeper start zones, at lower elevations, and in more wind-protected cirques or terrain which get hotter. Higher elevation, moderate angled start zones (34 to 38 degrees) that have seen enough of a breeze to keep surfaces cool have more collapsible crusts on SE and SW aspects.
2) The recent few inches of snow has recrystallized into near-surface facets (up to 1.0 mm in size) on a few slopes, in some cases above or below a very soft, thin, crust. It seems like you need all the right ingredients to find this layer preserved. Not so hot that it got cooked, not so cold that it didn’t produce a melt-layer. Not so breezy that the snow surface is wind packed. The locations where I found relatively large and well preserved near-surface facets was in a protected cirque near treeline.
In summary, the weak layers on the southern quadrant of the rose won’t be as bad as everywhere else, but there are still some potential issues. Rounding the corner towards east and west brings you towards a more concerning setup with thinner crusts over the well-developed dry spell layer. 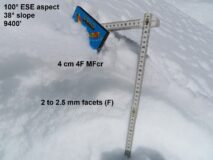 The weakest facets are below treeline where the inversion was strongest in January. This slope is right above Kebler Pass Road. 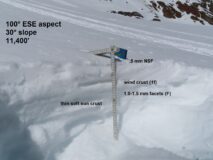 An example of a slope where the weak layer is not bridged by a strong crust because the aspect is tilted closer to east. 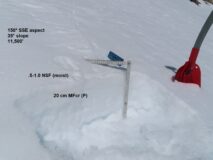 An example of a SE facing slope where the dry spell layer is capped by a thick, strong crust that is unlikely to collapse. This was in a hot, wind sheltered cirque of Ruby Peak. 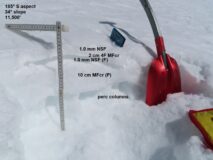 An example of a south facing slope where the dryspell layer is capped and anchored by melt, but radiation recrystallization has formed a concerning facet layer in the recent snow.

Example of a high elevation SE slope that doesn’t have as thick of crusts because it has stayed colder this month. This was on Purple Peak 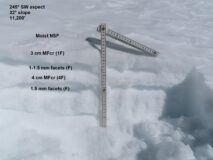 A southwest aspect in Robinson Basin 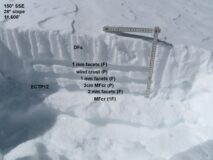 From Evan’s Basin, an example of a slope that has been getting a good breeze the last few weeks so not all the faceting has been capped by a sun crust. 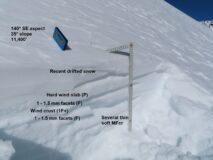 Another SE slope that gets more wind so crusts aren’t as well developed. 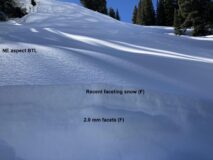 For comparison, here’s what it looks like on the shady side. All very weak. These types of slopes will avalanche first under lighter loads.