Avalanches: Extensive views from the Ruby Divide and did not see any fresh avalanche activity since the Christmas storm. I checked out the crown of the Schuylkill Ridge avalanche that ran around Christmas. It failed ~40cm deep on a layer of .5 – 1.0 mm near surface facets (Dec 22nd interface). This interface appears to be rounding and gaining strength, no significant hardness change or size change from the slab above, and non-propagating ECT results. The avalanche was SS-N-R3-D2-O. There were several other similar slides in adjacent paths. These bed surfaces hold a shallow, faceted snowpack now.
Weather: Clear. Light winds.
Snowpack: Snow depth consistently 230cm+ on various aspects/elevations except in obvious wind scoured locations. Dug 3 pits down to Dec 22nd interface and found it to be unreactive in extended column tests, anywhere from 70cm to 30cm deep, MFcr over rounding facets on southerly ATL, and rounding near surface facets on northerly N/BTL. No surface hoar observed in any pits, even in a suspect wind sheltered slope BTL. Wednesday’s wind event left shallow (less than 6″) but stiff drifts on obvious features. Stomped on a few of these and only produced minor cracking.  No other signs of instability. 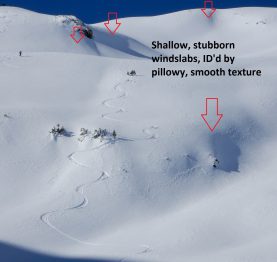 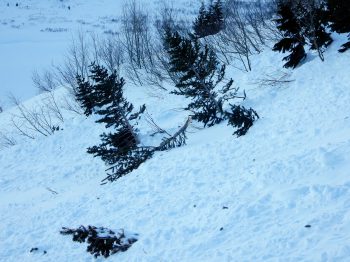 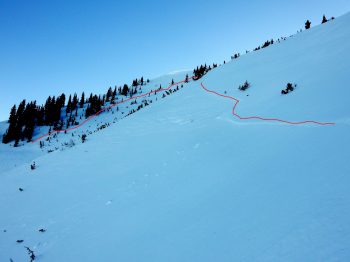 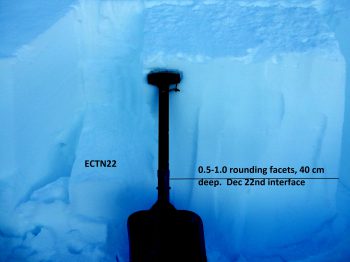 Avalanche appeared to fail about 40 cm deep on buried near surface facets.