Weather: Cold day up high with calm to light winds. Air temp at 11:40 @ 11,800 -11. Around noon skies became overcast with a low ceiling and light snow but no real accumulation.

Snowpack: We headed for a NW slope off of Scarp Ridge to take a look at shaded alpine terrain features. We probe across a rolling NW facing terrain feature and found depths ranging from 100 to 215 cm with the average being somewhere around 160 or so cm. One profile in 190cm snowpack showed very rounded basal depth hoar (2 to 3mm) that was 1F hard bordering on 1F+. Midpack was generally 1f+ and pencil hard without out any concerning interfaces. Top 30cm was a bit more interesting with multiple 1f wind slabs with thin weak layers sandwiched between. ECTN results for these upper interfaces with failures present beneath shovel width only (no real slab present from the last week or two of wind and snowfall).

A second profile in a shallower area was likely more representative of snowpack structure on a slope scale outside of drifted areas. This site had an HS of 140 cm. Basal weak layers were also rounded but only at 4F hardness. Notable test results were CT23SC on basal weak layers at the Thanksgiving interface but ECTX. Upper snowpack again had several thin wind slabs with weaker snow between but not enough strong snow to produce propagating ECT results.

In this piece of NW terrain, basal weak layers look to be gaining strength verified with temp profile but the upper snowpack remained very cold with strong gradients helping to preserve sandwiched weak snow near the surface. It seemed like locations with significant drifting from the last round of snow could produce triggered avalanches if a more substantial slab was present over buried mid-December weak layers. 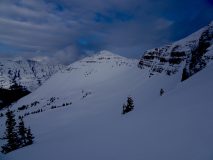