Avalanches: Lots of activity going on out there. Witnessed a point release either starting from a cornice or rock at the top of Red Lady Bowl that ran surprisingly far, almost to the first bench in the bowl. Ran about 5 minutes after sunrise. Also saw a skier-triggered crown on one of the last rollers in the bowl, looked like a soft wind slab around 8-12 inches thick, 10-15 ft wide, R1 D1. Saw many naturals, mostly on SE faces. Looked as though these slides failed on top of the crust from Tuesday’s (?) sunny weather. Crowns appeared to be around the 1-2 ft depth ranging from 30-50 ft wide. Largest natural was on the South side of Peeler Face, and this appeared to be an R2 or R3 slide, D2 at the very least. All others were in the R1-2 range and D2. Two crowns on SE faces of Evans Basin, two crowns SE face of Elk Basin, and then the previously mentioned Peeler. And an E-facing windloaded pocket below the roadcut at the bottom of the bowl ripped, I was told this was a repeat offender. Pictures coming to Facebook soon.
Weather: Cold in the morning with rapidly warming temperatures. Wind flagging present on many peaks with loading increasing to a consistent moderate snow transport on high ridgetops around 830 am. Winds out of the NW.
Snowpack: Around 6-12 inches of new snow depending on the slopes orientation to NW winds. Many areas windswept. 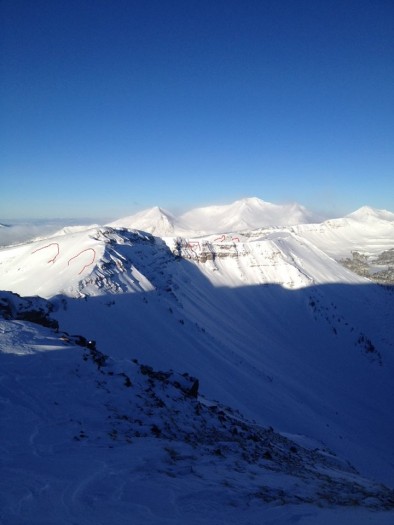 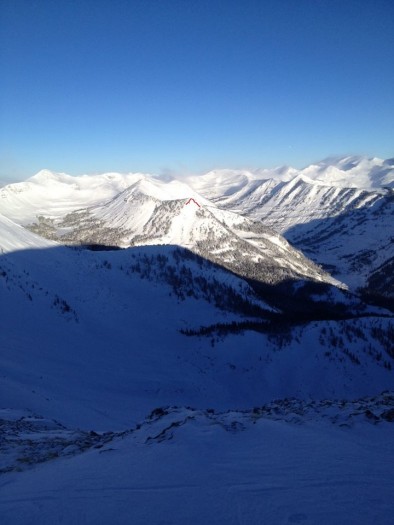