Below 9,600ft
Persistent slab structure was very weak with a faceting slab. A few collapses but no shooting cracks. ECT results were non-propagating slab fractures (ECTN, moderate to hard). Areas with previously wind hardened snow were most suspect.

10,000-11,300
Persistent Slabs became quite with no collapsing. HS averaged 100-140cm, slabs about 70+ cm thick. The 12/13 interface was obvious in the snowpit wall and still very weak facets, but ECT tests did not produce any results (ECTX), Compression tests produced sudden collapse results on the 12/13 facets.

Avalanches: Shallow windslabs were touchy at ridgeline on Northeast aspects near treeline. Two skier triggered windslabs generally 2-4″ deep but up to 6″ in places. 30-40ft wide and one ran 500 vertical feet but was still a D1. We watched a natural avalanche mid day on  a NE aspect near treeline. Appeared to be a shallow windslab that then stepped down to a 100 ft wide persistent slab, maybe a foot or two deep, but we observed this from valley bottom.  The whole mess ran 1,000 vertical feet and was large enough to bury a person.  SS-N-R1-D1.5-O.  That slope had slid previously on the Dec 13th facets in mid-December.   Lots of evidence of widespread avalanches during the meat of the avalanche cycle back in late December. 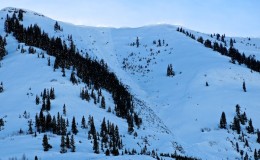 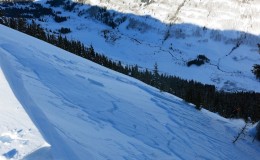 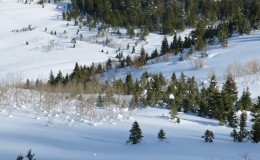