Observed several natural avalanches from the most recent storm on 11/25 – 11/26.

1 x SS on SE aspect of Treasury at approx 12,600′ – D1, looked like a Wind Slab
3 x SS on NW aspect of Baldy (WSC bowl) at approx 12,300′ – D1’s, poor vis but appeared to be very narrow Persistent Slab avalanche (possible loose snow avalanches from rocky area above were able to produce slight propagation as they pushed downslope).

Weather: Mostly cloudy skies with cloud deck nipping at the tops of peaks, no precip, light winds from the south with gusting into the 20’s – minor snow transport but no significant loading observed.

Snowpack: Toured through N and E aspects in open, near treeline terrain (11k to 11800′). HS generally varied from about 20cm to 80cm through this windswept terrain. While moving through easterly terrain we observed numerous collapses on small drifted terrain features. Collapses and resulting cracks were traveling up to 50ft. All of these cracks were failing on the 11/20 interface (old October snow). The slabs remain soft in this wind affected terrain with hand hardness of fist+ and some 4finger (with the exception of sporadic thin, stiff windboard at the surface). A very thin, about 1cm or less, melt/freeze crust was capping the old October snow up to treeline even on northerly slopes. This crust is weak and faceting through. The crust doesn’t seem to be much of an issue because it is thin and the immediate underlying snow so very weak. It will not take much of a loading event before failure.

Dug a test profile on a north-facing site immediately adjacent a small avalanche path with ECTP 5 results on the 11/20 interface. Given the obvious old weak snow and collapsing, this result was not surprising but when we jumped around, in several spots, next to this small avalanche path, we could not get it to collapse. The old faceted grains at the failure interface were generally around 1.5mm to 2mm and extremely weak.

Snow coverage on southeast, south, and southwest slopes in the area visually looked quite shallow. 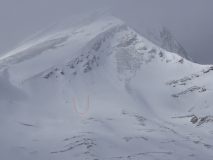 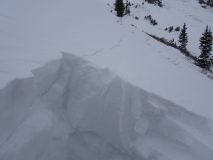 Shooting crack breaking down to 11/20 interface 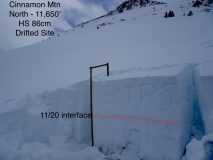 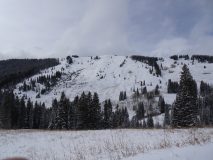 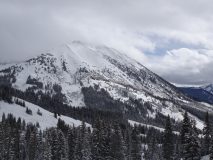 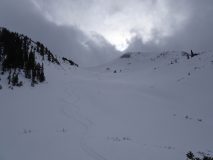 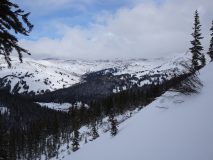 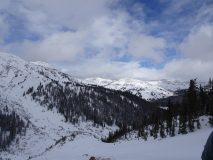 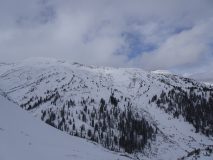 SE slopes with PT 12832 on left and Galena far right