WEATHER: Overcast sky. Pluses of snowfall throughout the day and becoming continues snowfall in the afternoon. About 2″ total today. Light winds at ridgeline and now drifting snow.

SNOWPACK: The snowpack is becoming interesting again. Storm snow accumulations where around 15″ near ridgeline or at the top of Coney’s bowl. Didn’t find thicker windslab deposits and the fist hard storm snow was behaving more like a well distributed, soft, persistent slab. At the top of the bowl a quick test pit produced a CT13 SC result on the old snow interface of weak facets and ski tests where only producing cracks about 5 feet in length. No collapses or any further cracking while traveling on slope angles under 35 degrees.

On a north facing slope below treeline the snowpack structure was extremely poor. About 60cm of large fist hard facets with about 50cm of recent fist hard storm snow. Storm snow was to soft to produce propagating results in an ECT but I still wouldn’t trust that slope.

AVALANCHE OBS: At ridgeline, a good ski cut on a slope around 37 degrees produced no result. Then skied a 33 degree slope a few hundred feet away that remote triggered that same slope with the ski cut. The storm snow of the last weak failed on the old snow surface of weak facets as described above. Crown was around 1.5 feet deep and 60 feet wide. Ran a couple hundred feet down slope into lower angled terrain. This avalanche was harmless to a human but only because of the relatively small size/exposer of the slope. AS-SS-R1-D1.5-I

Take home point, no obvious sings to instability such as whomping and only a couple forced 5 foot cracks, but still a remote triggered avalanche on a slope greater then 35 degrees. 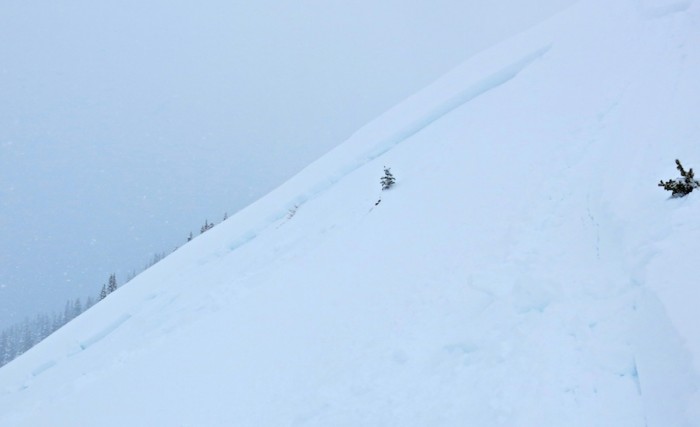