About 7 small natural avalanches that failed during the Christmas Storm on north to northeasterly aspects at near and below treeline elevations. Traveling on similar terrain today didn’t produce any new avalanches.

HS was between 40 to 60cm on average. The Christmas Slab continues to weaken and break down. On below treeline slopes, the only obvious signs of instability were slopes with some form of old wind loading or thin wind-board on the snow surface. Traveling on these specific terrain features would produce collapses and radiate cracks up to 80ft. HS didn’t necessarily increase much on these more loaded features but rather the Christmas Slab was thicker and had more strength. On slopes with slope angles in the mid 30’s, the snowpack would shift downhill slightly as it collapsed.

Slopes without and extra wind-board didn’t show any signs of instability. The Christmas Slab was weak.  Typically the top of the slab has faceted and become fist hard, with only about 5cm of stiffer (1F) snow at the 12/23 interface.

At the near treeline elevation band, the snowpack became much more wind affected and variable. Wind-loaded terrain continued to collapse and radiate cracks on mid to upper 30-degree terrain. Some portions of these wind loaded slopes had stiff pencil hard slabs that didn’t show signs of instability and appeared stubborn to triggering given the hard slabs. 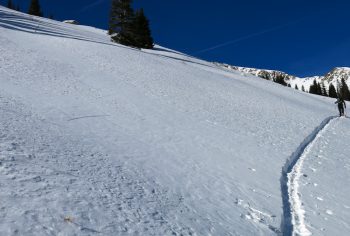 Small Crack after passing through this little wind-affected terrain feature