Avalanches: Nothing new
Weather: Warm temps all day. Snow showers early in the morning before skies opened up and the sun popped out for a while. The afternoon brought cloudy skies again and strong winds above treeline from the southwest with visible plumes off of the high peaks.
Snowpack: Traveling through wind-sheltered terrain near and below the treeline, we found slab structures ranging from 30-40cm on southeast and northeast aspects.

On northeast aspects near treeline, the slab was slightly larger ranging from 35-40cm which is resting on top of 60cm of completely faceted snow. Slabs on these colder aspects are also Fist-4 Finger minus in hand hardness. Two test pits did not show propagating results. However, once we added additional load to the slab, extended column tests showed full propagation (see video below). We skied steeper terrain on northeast aspects with no signs of instability, but steered clear of possible crossloaded terrain.

As we moved lower in elevation below treeline on northeast aspects, the slab steadily became softer and softer until we reached 9500′ where snowpack structure is essentially all facets to the ground, with only 15cm of recent snow on top. 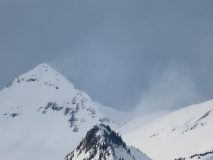