Avalanches: Observed a number of avalanches on Cement Mountain of varying ages from the past month.  Included images for avalanches that likely failed around the Feb 13/14 time frame.  Most of these avalanches failed on drifted features with two below treeline on non-drifted slopes.  Looking around leeward features in Southeast Mountains did not see any other recent avalanches.  While driving pavement in afternoon, I spotted a couple very small loose avalanche on Gothic Mountain coming out of steep, rocky southerly features.
Weather: A cold early morning in the canyon quickly gave way to warm, sunny weather. Above treeline, W and NW winds blew at consistent moderate speeds with high gusts.

Below 10k, the snowpack consisted of generally 80 cms of thin crust/ facet combos. When HS was less than around 80 cm, ski pen was to the ground. As we increased in elevation to about 10K-ish, HS increased above 80 cms to around 100cm and the snowpack thankfully began to support the weight of a skier while breaking trail. We didn’t get any alarming signs of instability as we were making our way up through the trees on N aspects below treeline.

As we got near and above treeline, we continued to see W and N winds transport snow onto leeward start zones. A snowpit test on a slightly windloaded, NE-facing aspect near treeline produced moderate propagating results. We did get one large rumbling collapse while traveling on ridgeline, adjacent to the NE facing start zones. The collapse did not produce any cracks but it was loud enough to hear over the blustering winds. Much of the avalanche paths we traveled above had already slid during the last 3 weeks. Most of the bed surfaces had not refilled enough to slide again. We chose not to ski any of the slopes that had previously avalanched because of the low quality of skiing, not necessarily avalanche hazard.  Briefly touched a few below treeline sunny slopes that were moist but not wet enough to cause Wet Loose concerns due to winds keeping surfaces relatively cool. 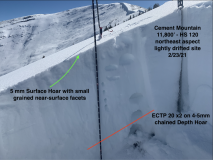 Test profile from near treeline slope. Represents a shallower portion of a slope, not the deepest drifted spots. The previously reported very large natural avalanche in North Bowl is visible in background. 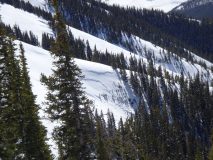 Natural avalanche from this past week on drifted northerly slope on west side of Cement Mountain. 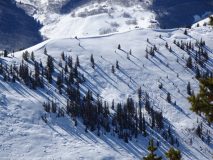 One of two recent avalanches below treeline. Likely failed around 13th or 14th. NE slope. 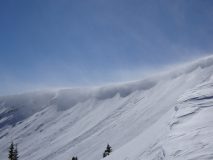 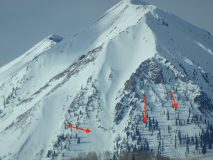 Couple of Loose avalanches on sunny side of Gothic starting near rocky areas. All remained very small in size.