Location: Cement Creek Road to northeast side of Hunters Hill

Snowpack: Traveled through a typically shallow part of the forecast area checking on snow cover, surface conditions, and to perform snowpack tests on drifted, shady terrain feature at upper elevations. Below treeline snow cover is shallow but pretty continuous across all aspects except for a good bit of dirt on due south slopes below 9,500′. Snow surfaces on sunny slopes near and below treeline were moist/wet at the surface and moist to the ground. Crusts have formed extensively on east through south through southwest slopes. Northerly slopes, even at lower elevations, remained dry and have started to facet in protected areas though the grains remain small, around 1mm. HS (snow depth) at the head of Cement Creek was only about 1 foot (30cm) at 11,400′.
Upper elevation northerly slopes were a mix of sastrugi and windboard. Traveled to around 12,000′ looking to find slab resting over weak snow near the ground. Walked across several stiff drifted pockets without signs of instability. Test site produced propagating results on a small drifted feature in old, weak 2mm facets at the ground (ECTP 11, see photo). The ground was very smooth at test site. Additionally, I had to probe this feature to find where the weak layer was present, it was discontinuous during probing and in a portion of my pit wall. Snow surface and slab were very stiff, supportive to boots. 20 feet to either side of my test site the slab tapered down to only 10 inches thick. Visually it was impossible to tell without probing. Nearby start zones immediately below ridgetop looked to have some small, pockets of slab present but they were not connected and very isolated across the terrain. Triggering an avalanche appeared unlikely but not impossible on upper elevation shaded slopes in this area due to the isolated nature of slab and weak layer. 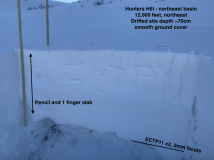 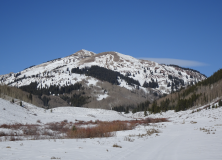 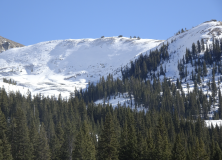 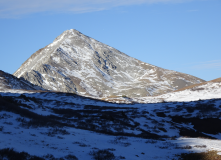 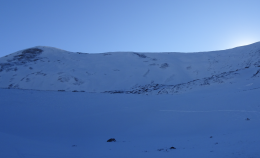 Northeasterly side of Hunters Hill, although white, it did not appear to hold much significant slab except in small scattered pockets