Avalanches: Cement Mountain – large avalanche above treeline in North Bowl, crown drifted over but flanks still visible D2
Hunter Hill – thin slab on SE aspect near treeline D1.5
Italian Mountain – debris visible in southwest gully, D1
Weather: Clear, cold low in drainage with much warmer temps at head of valley, no wind below treeline
Snowpack: Traveled along Cement Creek Rd. to look around at snow depths and get a general impression of conditions from snowmobile by glassing terrain with binos. Checked snow depth and snow water equivalent in two locations: near Deadmans TH (9,600′) HS around 45 -50cm (18″) with 3.6″SWE, near Italian Mountain (11,000′) HS 65cm (26″) with 5″ SWE. Overall the snowpack is very weak in this area. Boot penetration in areas unaffected by the wind was generally full depth. Below treeline snowpack is just faceted fist hard snow, did not travel on any slopes but hard to imagine much Persistent Slab issues except for very isolated features stiffened by the wind. Near treeline terrain coverage looked to be deep enough to have Persistent Slab issues. East and southeast slopes near treeline appeared to be the most common places to find slabs of concern. Many northeast slopes near treeline looked to be worked over by the wind. Some minor collapsing while skinning around flat meadows, but collapses did not extend much past 20 feet, silent no audible noise. Alpine terrain was largely hammered by the wind. I would expect hard slab conditions on many features above treeline, I did not see many slopes above treeline with soft snow surfaces. 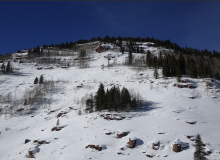 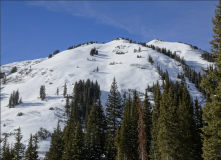 East-facing near treeline slope has the appearance of slab formation 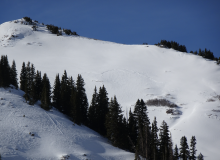 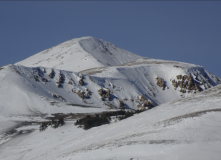 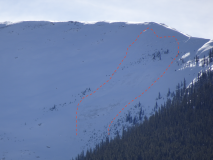 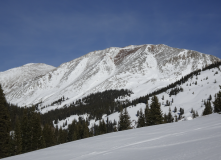 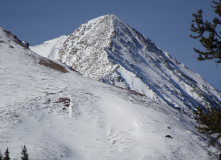