Avalanches: While out Cement Creek area observed quite a few natural avalanches from last week. Most looked old, from say around the 13th, a couple cross-loaded alpine features on Italian and Hunter Hill may have been more recent. Most slides were D2 with the exception of the previously reported avalanche in the north bowl of Cement Mountain which was closer to D3 in size. I forgot my camera in car so no pictures from cement Creek. While glassing terrain from HWY 135 in the afternoon I spotted two recent large avalanches on south and southwest aspects above the Twin Lakes drainage out Brush Creek (see photo)
Weather: Partly cloudy skies, cool temperatures, and moderate winds below and near treeline. Leeward features on Italian, Hunters Hill, and Double Top were loaded by a steady stream of wind-blown snow.
Snowpack: Traveled largely on easterly slopes between 10k and 11.2K in the middle portion of Cement Creek on a recreational ski day. Snow depths were generally in the 100 – 140cm range. Only a few collapses during the day, one large collapse while exiting the test profile site. Ski penetration was around 6 to 8″ and boot penetration was as deep as my legs are long. Slabs were generally around 2 feet thick with 1-finger hardness sitting on 2 feet of weak faceted grains. Test site produced ECTP 20 on basal depth hoar. Sunny slopes developed a 1-2cm melt/freeze crust from Saturday with small-grained facets below and were covered by just a skiff of new snow from Saturday night. 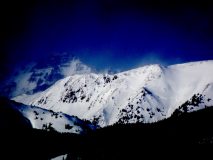 Pair of recent large avalanches on south and southwest aspects above Twin Lakes drainage. Believe to have failed 20th or 21st. 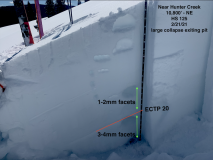 Test profile from northeast slope with cohesive slab resting on very weak snow – poor structure that we had no interest in testing on steep terrain.