Weather: Mostly clear skies until 930 with clouds returning there after. Snowfall between 10am and 2pm at 11750’ produced 3”. Snow was still falling S1 when we descended. Winds were light with moderate gusts at treeline.
Snowpack: While ascending Coon glades storm accumulations were only a few inches up to 11000’ but above that elevation new snow increased greatly. At 2pm @ 11750’ new snow accumulations since Thursday night was 40cm. A rain crust was present from Saturday up to treeline below 30cm of thick snow.

The Wet Slab cycle between 10,000ft and 10,600ft on northerly and easterly aspects was really impressive in the Slate River Valley! Mostly D2 to D2.5’s. See photos below. Clouds obscured visibility for details or pictures of other avalanches on: The South Face of Purple Mountain, South Face of Mineral Point, North Face of Schuylkill Mountain and a D2 slab in Red Lady Bowl. Other large avalanches were reported in different observations.

Weather: A beautiful break in the clouds late morning turned mostly cloudy through the mid-day and decreased again in the later afternoon. Winds were cooking along with snow plums on the big peaks near and above 12,000ft. Mid-day snow showers accumulated about 2″ of snow at 11,000ft between Noon and 3pm.
Snowpack: Pushed hard with a snowmobile on a number of steep terrain features with no sings to instability. The caveat would be that these terrain features were relatively small in the big picture and generally supported by the terrain below. Hand and formal stability tests also showed a decent bond between the new/old snow interface.. At 11,500ft total snow accumulations for the weekend were about 17 thick inches. Those numbers tapered off quickly below 11,000ft as you got below the rain line. There were some big puddles of water sitting on the snowpack in valley bottom and water in the creaks was definitely up. 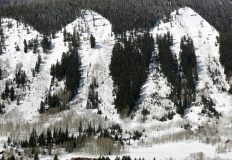 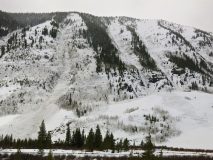 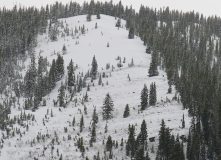 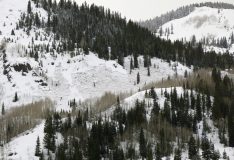 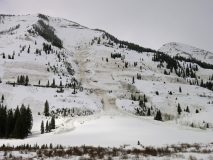 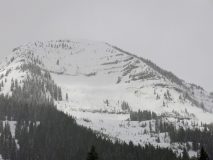 Loose Wet avalanche stepping down to a bigger slab avalanche on a northeasterly terrain feature at 11,000ft 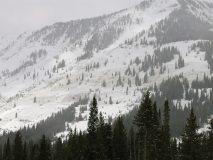 17″ of new snow down to the old snow interface at 11,500ft. Getting moist and thick on sunny slopes.

33 degree northerly facing slope at 11,200ft. 1/6 interface was down 50cm with facets below the soft crust. This was the most concerning structure in the pit. A 5cm layer of wet snow was down 30cm. Both of these interfaces produced ECTN results. 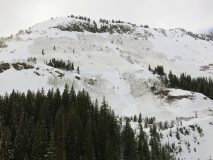 Avalanches:
Weather: This is beyond what i have even been used to in winter. The 24 hour totals includes 0.42″ of rain (0.30″ after sunset), and that is the easy part. For snow alone there was 6″ new snow and 0.88″ of water from the snow. A little bit of separating out the snow from rain during the transition period but this is close if not accurate (some snow on the snowboard washed away in the evening). Snowpack dropped 4″ during the day yesterday and all that moisture last night only raised it 1½” to 35½”. The overnight low is the current 30F. Snow stopped and strong wind started up and going on now but with little patches of clearing.
Snowpack:

Avalanches:
Weather: Steady, light snowfall for the past 24 hours with 8″ new and almost 10% water at 0.75″. Wet, heavy, sticky snow. Why anyone likes spring snow is beyond me. No wind and staying mild overnight with the low today at 31F but the high yesterday only 38. Snowpack had been down to 32″ but now at 38″. Currently obscured with very light snow, no wind and 31F.
Snowpack:

Weather: Got out in the late afternoon. The mid-day break in the storm got going again in the afternoon. Rain like substance falling from the sky at the Slate River TH transitioning to snow out by Pittsburg. Overcast sky and just enough wind to blow some snow around at ridgeline.
Snowpack: So wet below 10,500ft. New snow accumulations in Pittsburg were about 3″ wet inches of snow. Climbing towards 11,000ft at the head of Washington Gulch that new snow started drying out and was about 7 moist inches at 4pm. The top inch was dry and cold. Also measured 7″ wet inches of snow in Poverty Gulch at 9,600ft. The new snow is sitting on a wet saturated snowpack at lower elevations, and was sitting on a wet and soft crust on an easterly facing slope at 11,000ft. Lots of wet loose avalanches at lower elevations, but minimal signs to instability at elevations near 11,000ft. 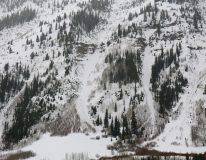 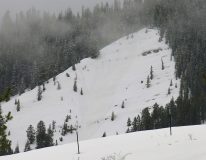 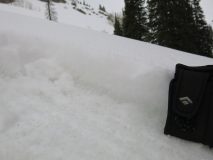 Low angle easterly aspect at 11,000ft. About 7″ of moist snow sitting on a wet and soft permeable crust.

Weather: Party Cloudy sky. Sunburn. Moderate westerly winds at upper elevations. Warm temps.
Snowpack: Spend most of the day above treeline dealing with a cold snowpack. Ski pen was on the 0 to 10cm range from south to north facing aspects. North to east facing aspects had some nice creamy snow on the surface, or wind-board and sun effect. South facing slopes stayed cold were they were exposed to the wind, and softened in the sun were they were protected from the wind. No avalanche concerns encountered at these upper elevations. Skiing a protected south aspect at 2pm had wonderful spring softened snow above 11,000ft, but below the snowpack became punchy and wet. Didn’t produce much for wet avalanches but the snowpack below 11,000ft didn’t feel inviting to linger around to see what could happen. See photos for profiles on south and north aspects.

Upper snowpack profile on south aspect at 12,500ft. Soft melt freeze crust at the surface. Grand Travers storm is dense 1F+ snow sitting on 4cm MFcr. CTN. HS was 320cm but this terrain had a but of a gully to it and profile was in the middle of the terrain feature so HS was probably greater at this location. 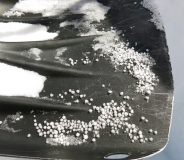 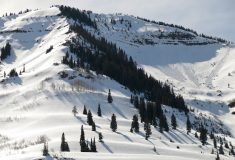 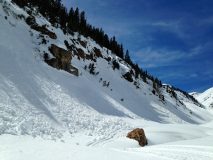 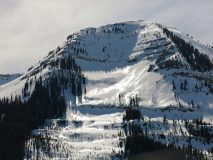 Evidence of small D1 in upper Spoon from yesterday’s skiers. Initiated off turn, gained surprising amount of mass given how little surface snow was available to entrain. Also saw evidence in the major westerly gully of a decent sized wet loose avalanche that must have ran several days ago as it has a light dusting of snow on the debris. D2, would have been a nasty entrainment.

Weather: Scattered skies, cold WNW wind 10-15mph, steady. Temperatures were quite mild when out of the breeze.
Snowpack: Snowpack at lower elevations continues to consolidate and remain very supportable with minimal ski pen <11,500. Ski crampon snow gave way to good boot packing, supportive with 20cm boot pen into series of melt freeze/rain crusts. Snow booting up the Spoon was corn that didn’t know it was corn. Spring-like snow surface, but still very much cold, faceted junk below. No slab present however. No fresh windslab evident. Snow softened on south facing terrain between 10-11am, not sure west facing every got a good thaw above 11,500ft today with overcast skies developing.

A number of loose snow avalanches in the Ruby Range. Wet on southerly slopes and dry on northerly slopes. All D1 to D1.5. A cornice failed naturally on the East Face of Mt Owen at about 4:30pm. Entraining more snow with it and getting close to a D2 given the size of the terrain. A number of backcountry users were skiing aggressively without any significant results.

Weather: Strong westerly winds and snow plums in the alpine. Winds increased in the afternoon but snow plums decreased.
Snowpack: Late and quick afterwork tour. Ruff and variable snow surface conditions. Some good soft snow surfaces out there but lots of refrozen or wind effected snow surfaces. No sluffing and not much for fresh wind-load to be concerned with. Avalanche issues felt isolated and stubborn.

Weather: Partly cloudy skies clouded up slightly in afternoon to nearly broken. Very warm temperature on car thermometer at 1500 was 46º, but off the road in the hills was likely upper 30s. WNW Winds we gusty 20-30mph gusts near treeline.
Snowpack: Snowpack continues its spring transition with these warm days at lower elevations but not much warming near treeline with cold wind and late afternoon cloudiness. Poor structure remains, and the shallower instability was reactive with extended column test (ECTP23) at 11,300ft, NE facing near CB. The deeper, scary depth hoar buried near the ground (100cm deep), remains cold, sharp-angled and unconsolidated. Minimal wind slab development in the near treeline ridgeline I traveled, though snow was blowing. Lower elevations at 1430 were becoming push-a-lanchy in the old, rain-saturated transformed snow once last night’s refreeze broke down.