Avalanches: skier-triggered loose avalanche in surface snow on a very short, roll-over. The steep slope was short so only entrained the top few inches.
Weather: Mostly clear day with cool air temperatures. Light winds at 12,000′, no transport observed.
Snowpack: Traveled through northerly slopes only. Produced one collapse around 10,400′ that rolled maybe 100ish feet – dug profile nearby to have a look/test, see photos. Produced a few other small collapses below treeline but fairly localized, ~30 foot radius. Ski pen was surprisingly good at 6″ – so trail breaking was pleasant. As we ascended to near treeline the snowpack felt similar, just a bit deeper – slab never felt more than 4f finger hardness (did not travel through drifted features). Walked through a variety of meadows above 11K with little or no traffic this winter and stomped hard looking for a collapse but nada even though pole probing indicated the obvious weak snow at bottom of snowpack. Skied slopes in the low 30-degree range but actively avoided nearby steeper features in the near treeline elevation band without any signs of instability. While descending, experienced a couple of spots with “trap-door” conditions where we sunk deeply into the snowpack even near treeline where snowpack depth decreased to less than 70cms. It is clear that the slab continues to lose strength due to faceting, but there are still a few places/features that can produce a smaller Persistent Slab avalanche below treeline but those places are becoming harder to find. 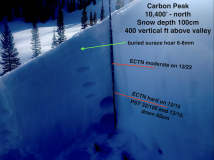 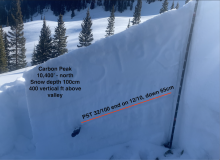 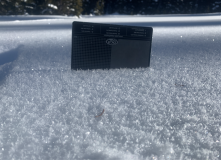 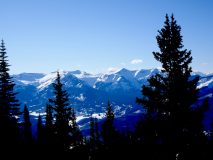