Avalanches: 3 large to very large persistent slabs in the past 24 hours. See photos.
A D3 on the south-facing path of Mt. Bellview ATL (triggered by cornice fall or windslab?)
A D2.5 on an east aspect NTL of Whetstone, triggered by windloading. The slide spanned multiple start zones and put large amounts of debris into two separate runouts. We investigated the crown; it failed on the 1/19 crust and quickly stepped down to basal facets, about 18″ to 24″ thick.
A D2 on a southwest aspect ATL on WSC peak, appears to be triggered by warming or a small loose wet.
Also 2 D2s on east aspects NTL of Storm Ridge (West Elk Wilderness outside of our forecast area) that looked fresh from the past 48 hours or so.
Weather: Mild temps, few clouds, light winds with no transport observed by the time our tour started late morning.
Snowpack: Generally a lack of signs of instability except where slabs were less than 18″ thick. We got several collapses and shooting cracks below 9,500′. We also got several rumbling collapses on a southwest aspect near treeline where snowpack was variable in thickness from previous wind erosion. Elsewhere, persistent slab structure is widespread (easy to feel with probing) but stomps and jumps didn’t produce any results. Stability test at 12,000′ on a SE aspect produced hard propagating results on 2mm facets near the ground, below a four-foot hard slab. 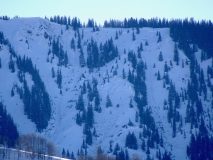 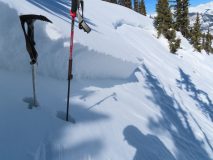 Looking at the crown of the Whetstone slide. It was about 18″ to 24″ thick, failed on the 1/19 crust/facet layer and stepped down to the ground a few yards further downslope. 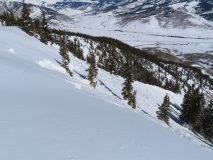 Crown crossed ribs that might normally be treated as safe zones. 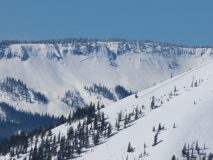 A pair of fresh looking D2 slabs on Storm Ridge (E, NTL). Fresh ones are middle and far right of the slope. An older one on the left. 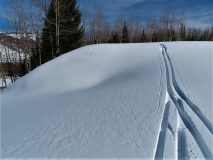 Several collapses and shooting cracks once we descended to 9,500′, where slabs were thinner and softer.

D2 on WSC peak (SW aspect), looks like it was triggered this afternoon by warming or a small wet loose. 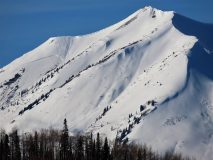 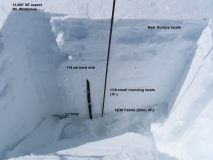 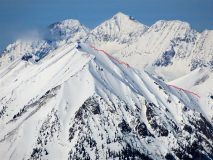