Weather: Splendid, cold in the valley, quite pleasant above 10,000′ with high temps at or just above freezing, lots of sun with only a few passing high clouds. Calm winds with no snow transport observed.
Snowpack: I travelled up Wolverine Basin to the start zone of Right Chute able to observe many aspects. Was paying close attention to possible Surface Hoar buried in the top of our snowpack as well as Persistent Slab structure in both areas that slid and areas that did have not slid.

Surface Hoar was observed in open areas from shady West-North-East. The most preserved crystals (pictures) were found on North aspects that have remained very cold and were up to 6mm; other aspects that may get a bit of sun were a mix of decomposed SH and DFs with aspects South of East having a mix of Melt Forms and decomposed SH. As the slope tilted to SE, this layer was 1cm breakable crust with small facets above and below. This layer was only 6-7 cm from the surface in this zone so it is hard to say what may happen between now and our next storm.

Although I consistently travelled on snow that presented as slab over weak, I experienced no cracking or collapsing, even clicking out of skis and punching into the weak layers with my boot in untracked terrain, with no results. Pit (picture) in the Right Chute start zone, N aspect @ 11,000′ revealed 3-4 mm basal facets under a 5cm P+ crust that were still very weak (F hardness) but rounding and not reactive in a long column test(ECTX).

Poked a few slopes that slid after the Thanksgiving cycle and now hold only F-4F- slabs showing no signs of instability in this zone.

Lots of settlement cones(picture) up to 30cm, a result of recent warmer weather. 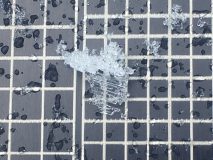 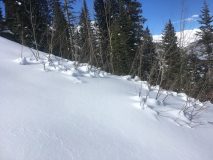 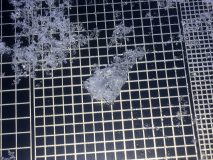