Several slides were a bit tough to tell if fresh or not because lots of crowns are still visible across the range. Certainly one fresh slide on south side of Cinnamon, D2.

Weather: Mostly clear skies down valley with clouds forming over Ruby Range and Schofield park from north flow. No snow.

Snowpack: Travelled on W and SW slopes below treeline up to 11,200′ and found HS average between 140-155cm. Stability test produced no significant results – nothing propagating. Found several small terrain features in upper 30 degrees that did not have any apparent traffic and stomped hard without collapsing or cracking. Overall the snowpack was quiet and supportive. Basal weak layers show significant signs of rounding and were generally in the 4f+ range for hardness.

Took a look at the remote triggered avalanche from Sunday on a SW at 10,800 feet. Upon inspection this slide failed on top of 1/15 suncrust, did not collapse it, involved just the drifted snow from 1/16 – 1/18.

Clear signs of drifting on to the south half of the compass near and above treeline from northerly winds. 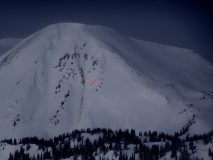 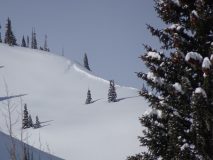