Avalanches: A few recent small slab avalanches were seen on northerly facing slopes in the lower Brush Creek Area. The common theme with these is that they had some form of wind-loading. Visibility became more limited in Upper Brush Creek. The only avalanche observed making it to the valley bottom was D2 in size and initiated on E-SE NTL terrain at 11,500ft. Other terrain such as Carbonate Hill and Star Peak never came into view.

Weather: Mostly Cloudy to Obscured Sky. S-1 to S1 snowfall that was on and off Sunday and Monday. Mostly light winds down in the valley, but the tops of trees were swaying and stronger winds could be heard at upper elevations.

Traveling into Upper Brush Creek and getting to valley elevations above 10,300ft, that is were the snowpack started to take shape and was more similar looking to the snowpack found in the Crested Butte Area. About 6 to 7″ of new snow had accumulated in this area between Saturday and Sunday AM. HS increased over 120cm and gained with elevation. Near the Friends Hut the HS was about 150cm.

No obvious signs to instability were observed. Though we were traveling on the valley bottom and never entered Avalanche Terrain. 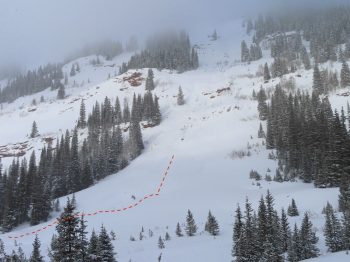 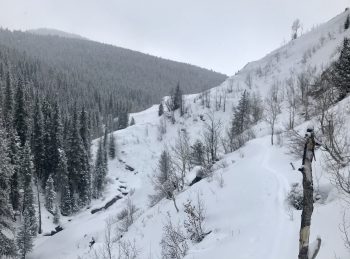 Death Pass with a small slab visible in the distance. East was zapped by the sun, while NE tilted portions of the slope held a more concerning snowpack structure especially where further wind-loaded.