When we returned to Crested Butte at about 445-noticed Gibson Ridge failed during the day, D2 (see photo). This slope had avalanches earlier in the season. From talking to others it appears as though it failed sometime maybe in the afternoon around 4pm. Additionally, another low elevation avalanche failed at a similar time. Air temperatures were in the mid 30’s at this time with light sprinkles of rain. I would guess that these were wet slabs.

Weather: Day started off with moderate snowfall before 10am but tapered off. Overcast skies with increasing temps during the day to above freezing at 10,000′

Snowpack: Went out lower Brush Creek and West Brush Creek. Poked a couple of holes. Lower Brush Creek near valley bottoms at 9,200′ had HS around 160cm. West Brush Creek at 10,000′ HS around 210cm. Main Brush Creek area was a SE slope – here the layer of concern were well developed basal facets. February and March snowfalls have created a thick slab just over a meter thick. Crusts in the mid-pack did not show much sign of faceting above or below.  No concerning test results in upper snowpack – there looked to be a little faceting above and below dense rain-wetted snow from 3/6 down about 30cm – ECTN.
West Brush snow volumes increased quickly as we ascended the valley to HS of 210cm. NE facing slope at 10,000′ had one layer of buried near surface facets down about a meter but they are rounding- ECTX. Even hammering on column and smashing block produced no result on mid-pack weak layer. Basal facets in bottom 50cm of snowpack here were F to 4f hard and looked like the layer of concern for full depth slopes without previous avalanches. Top 15cm of this shady slope was moist to wet right at surface.
In these shallow parts of forecast area, basal weak layers were between 100 and 150cm below the surface. 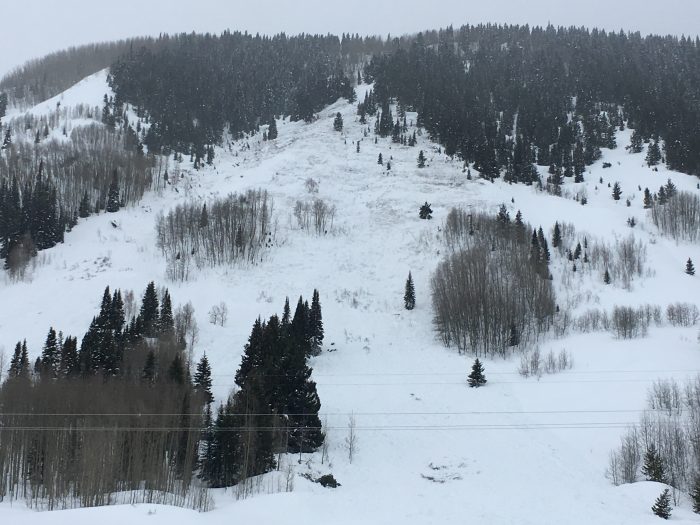