Avalanches: Flat light made old avalanche observations from a distance difficult. Many slopes have further been smoothed back over with recent winds and more snow. There was a natural avalanche cycle on northerly and easterly slopes in that area. While westerly slopes had a few cross-loaded pockets release too. It’s just hard to say how much of the terrain was involved in that cycle from afar.

Skier triggered two small Persistent Slabs on cross-loaded northeasterly slopes near treeline. These slopes were relatively small, while the crown heights were about 45 to 50cm.

Snowpack: As you would imagine, lower brush creek is, well, brushy. Any potential avalanche issues are isolated and mainly confined to previously wind-loaded slopes.

Traveling above 10,000ft things start to get more interesting. Moving through northeast to east-facing slopes regularly produced shooting cracks and collapses. All these red flags traveling around sure didn’t inspire any confidence. Kept slope angles fairly low and didn’t take much exposure to steeper slopes. The 12/11 week layer is widespread, however, slabs are becoming more specific. First hard soft slabs are still collapsing into the fist hard 2-3mm very weak and striated facets, but in some areas, those soft slabs are starting to rot away themselves. A subtle bit of drifting below treeline, or more wind-pressed snow, seemed to be the ticket for the specific areas showing the most obvious signs of instability. Unfortunately, those areas can be so subtle that they are not easy to identify, and most often line up with the better-looking spots to ski.

Since I was mostly on slopes less than about 30 degrees, the slope would collapse/crack and do the ankle roll thing as the slab shifts downhill, but doesn’t continue that downhill motion further due to the lower slope angle. Many of the steeper slopes may have already avalanched, or the previous northerly wind events may have stripped out some of the snow. Currently its hard to see the subtle differences in the snowpack from a distance and it would be a hard call as to what would happen on many steeper slopes.

Heading into the next storm, the general November/December or 12/11 interface would remain the layer of concern.

HS averaged 45 to 70cm, while ski pen is close to the ground. 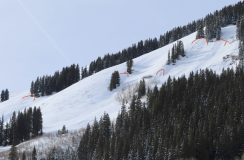 Example of old crowns, of varying age over the last week. These were some of the easiest to identify from a distance. East BTL.

Typical example of shooting cracks through a soft slab, over the ~10cm thick, 12/13, 2-3mm striated NSF. 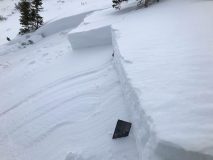 Simply thicker slabs on recently cross-loaded slopes NTL, over the same weak layer. This avalanche was remotely triggered about 10ft away once I walked onto the slab.