Weather: Sky was already clearing by sunset with few clouds through the day. Thicker clouds looked to hang out over by the Ruby Range. Light winds.

Snowpack: General weak snowpack, but not necessarily confidence-inspiring. HS average near 100cm. Ski pen was surprisingly supportable at around 10-15cm, but boot pen was still most of the snowpack. At the lower elevations traveled, the weakest facets near the ground were the layer of concern. I would estimate a little higher in the terrain with more snowpack structure and the mid-pack weak layers could have been more problematic or better defined. On one hand, I wasn’t surprised by the lack of signs of instability while hunting for them, on the other, I didn’t find any confidence in the snowpack and didn’t care to push into steeper terrain.

One test profile on a protected slope at 10,400ft on a NE aspect, 33-degree slope. HS 125. ECT N results in the middle and upper snowpack. Those layers of snow were not drastically different from one another and the whole thing was faceting together. I’d estimate that more concerning structure could have been found higher in the terrain or where the HS was greater. There were about 5cm of F hard facets near the ground and that was the layer of concern in this profile.

Low in the Brush Creek Drainage, there wasn’t much snowpack yet and it was way more punchy. You had to get up towards Teo to start developing the snowpack described. The south side of Teo was looking generally thin and not too concerning. Cross-loaded terrain down low could have had better structure, or up in the alpine. 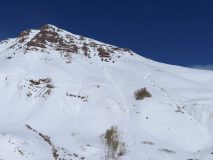 South Side Of Teo 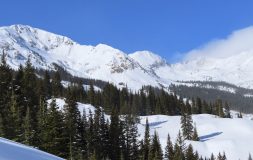 Looking up valley toward White Rock 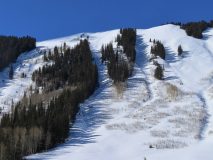 East facing terrain with a couple old small avalanches that looked to have run as sluffs.