Observed avalanche activity: Yes
Avalanches: Ascending the red lady skintrack, at about 11,250’, we remotely triggered a D2.5 soft slab avalanche on a windloaded E-SE facing slope NTL and below a ridgetop. The crown was 50-100cm thick, and propagated an estimated 200 ft. The slab was 4F hardness near the bottom tapering to F hard near the surface. We also noticed a dust later near the bottom of the storm snow. The bed surface was small grained (1-1.5mm facets) on top of a soft, collapsible crust. There were also small grained facets below the crust too.
Weather: Scattered clouds throughout the morning with intermittent periods of sunlight. Around noon, cloud cover increased to overcast as SW wind speeds also increased. Precipitation intensity hovered around S-1 to S1 during our tour (ended at 1:30).
Snowpack: At lower elevations, there was 6-10” of low density new snow. As we ascended in elevation, we found 8-17” of slab on top of various dry weak layers. Ascending on south, the slab capped a stout MfCr. As the aspect became more southeast and east, crusts become weaker and softer, unable to support the load from this storm on lee slopes. On low angle south terrain, we got a handful of collapses in gladed areas that simply don’t receive enough direct sunlight to produce a stout crust. 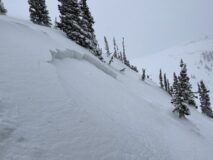 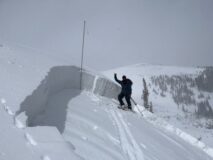 Additional comments: This was a slow moving avalanche that started on the low end of the slope and worked its way up slope, sympathetically releasing the windloaded area.