Weather: Overcast skies that later cleared by late afternoon. Light winds from the NW at 12,000ft. No snow transportation observed at ridgetops.

Snowpack: New storm snow since Wednesday ranged from 8″ below treeline to 24″ near and above treeline. Although winds were calm last night, above treeline we could see pillows of previously wind drifted snow below ridgelines on easterly facing terrain. No cracking or collapsing was observed on any aspect we traveled on today. By late afternoon, snow surfaces below treeline on southerly aspects became moist with a thin breakable sun crust on steeper slopes. 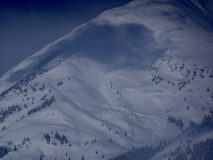 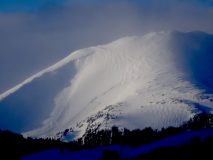 Image of South Bowl on Baldy with evidence of two separate crowns. See other photo for debris track with crowns obscured in clouds. 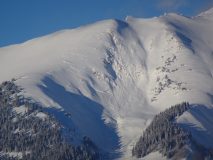 Somewhat drifted over crown on near treeline, southeast-facing feature on Red Ridge above East River 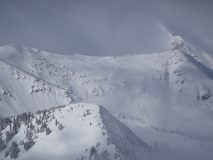 Broad and deep avalanche on southeast terrain on Peeler Peak 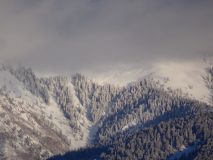 Recent large avalanche on a west-facing near treeline slope of Cement Mountain. 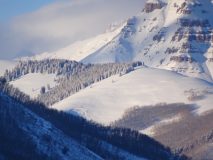 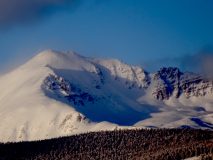 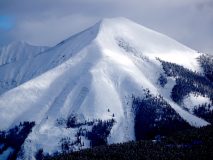 Deep crowns on north and northwest gullies of Whetstone. Failed in past 24 hours.