Avalanches: We saw a D1 slide on an east aspect later in the day. We had toured near it (see photos) earlier in the day, did not see it go at that time but saw the avalanche later in the day. Not sure if we remote triggered the slide or if it happened naturally later in the day. Did see the aspect getting wind loaded later in the day.
Weather: Temp: Mid 20’s
Wind: light in the area we toured (moderate gusts during our tour)
Sky: Partly cloudy
Precip: None
Snowpack: Pit:
Elevation: 10,360
Aspect: East
Slope angle: 26
HS: 106
CT M SC
ECTP Moderate (13/16/19) SC 31cm down on the 1/19 interface (see photo)

Note: I dug a pit with a course in this area 10 days earlier and was not getting propagating results. The new load has added enough load to stress this layer.
We had multiple collapses throughout our tour. 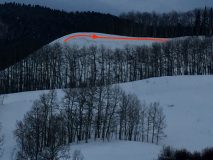 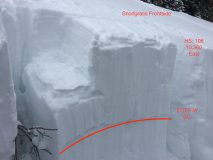