Observed avalanche activity: Yes
Avalanches: Inspected the previously reported avalanches near they Y and in Red Lady Bowl.
Weather: Ridgeline Wind Speed: Calm
Wind Loading: None
Temperature: 50 F
Sky Cover: Clear
Weather Description: Very warm day, full sun, no wind.
Snowpack: We found 1-finger hard slabs resting on Fist-hard facets. The slabs were soft on top, stiffer at the bottom, with an obvious dirt stripe above the faceted weak layer.
At a northwest-facing crown profile above a snowbike-triggered avalanche from Sunday, we found a reactive, dry snowpack. ECTP 14 on the dry-spell weak layer.
Traveling through sunny, southerly-facing terrain on Mt. Emmons, we experienced many dozen collapses with long-running (100’s of feet) cracks. Meltwater reached the dry-spell facets and created unstable conditions.
A profile on the flank of a large skier-triggered avalanche in Red Lady Bowl showed the meltwater reached the weak layer yesterday. Water wicked through the low-porosity facets. Today, meltwater reached another 10 to 12 inches below the facets into the upper part of the Holiday Slab. 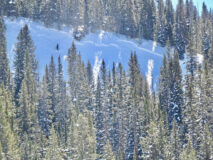 A snowbike-triggered avalanche the ran on February 28, 2022 near Kebler Pass on a northwest-facing slope around 10,100′ 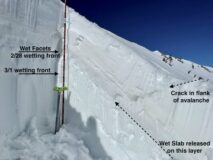 A profile on the steepest portion of the flank of the avalanche. We dug into a crack that radiated out from the avalanche along the eastern flank, which clearly showed the weak layer. 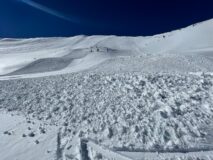 Looking up a Wet Slab avalanche on an alpine southeast-facing slope. The avalanche released between 10 and 30 minutes after a skier skied the slope. Many of the tracks in the left of the image were placed around the time of this avalanche. Photo March 1, 2022 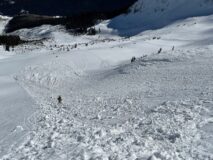 Looking down the avalanche in Red Lady Bowl. The debris showed signs of meltwater mixed with the debris. Photo March 1, 2022 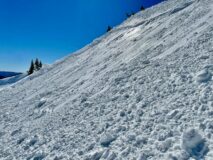 Verglas formed on the bed surface of this avalanche 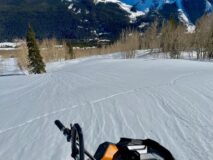 Southerly-facing slopes became very wet. Rills formed in the snow surface on March 1. We experienced dozens of collapses with long-running cracks on every open slope we travelled upon. 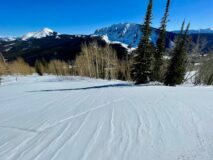 Southerly-facing slopes became very wet. Rills formed in the snow surface on March 1. We experienced dozens of collapses with long-running cracks on every open slope we travelled upon.

Additional comments: Uncertain if anybody caught, but no hole found in debris so no one buried