oh man, there are remains of nearly countless slides looking down the Ruby Range. Avalanches were focused on N, NE, and E with a few others on SE. Lots of avalanches at all elevation bands. Slides ranged from very small D1’s, tons of D2’s and one D2.5 off of Purple Ridge on a NE aspect. Take a look at photos below for a sampling. Based on refilling of crowns and bed surfaces, avalanches failed throughout the storm. Some crowns very near each other had failed hours apart, one would look fresh with no refill, and other places partially refilled, and others were basically fully refilled but were discernable because of debris shaped piles in aprons.  These photos are a small representation of whats out there.

Weather: Cold and clear, blowing snow off highest peaks early morning, but light winds BTL and NTL during tour from 1030 to 400
Snowpack: Toured around S, SE, and E aspects NTL on Baldy Mountain. Snow has settled significantly w/ ski pen about 6″, supportive. While walking through lower angle sections facing South and East, our group experience several collapses that spread up to 100’+. 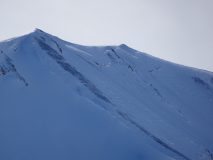 D2.5 off Purple Ridge, NNE. Debris appeared to run all the way in to “death valley” that leads up to Yule Pass 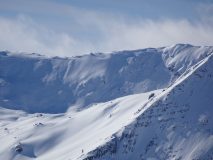 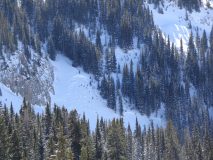 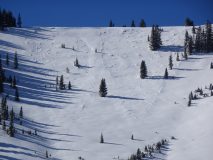 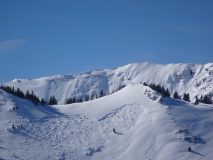 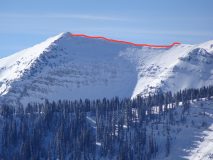