Weather: We spent the afternoon out Kebler Pass from 130pm until 4pm. During this time winds had relaxed blowing only lightly below treeline but evidence of strong winds was obvious from early in the day. Snowfall was generally light with 3/4″ accumulation from 2pm to 4pm. Skies were often obscured and mostly cloudy.

Snowpack: We poked a hole on a NE facing slope at 10600′ at the Anthracites and found HS ~210cm. It was a little difficult identifying snowfall from the past 24 hours but as of 330pm it looked like 36cm (~15″) with .65″SWE….ya it was pretty blower. During test profile an obvious Surface Hoar stripe was found 70cm down (suspect this layer was buried on the evening of 1/8), results on this layer were ECTP 13 with the slab sliding off the weak layer into the pit “cash register style”. We found a small adjacent slope and walked above it and, without any effort other than approaching, remotely triggered an avalanche on this layer. 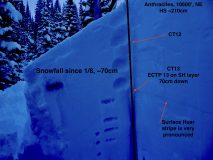 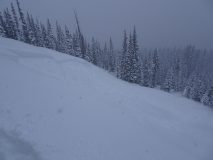 View of remotely triggered avalanche that failed on Surface Hoar 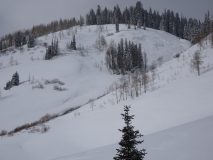 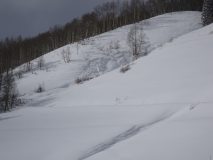