Weather: 9a-230p at the Anthracites. Snowfall rates varied from NO snow to S5 rates for brief periods. Overnight plus daytime accumulation totaled at ~13cm. It was still snowing hard when we left. Snow type and quality shifted from stellars, to graupel, to fat “wet” flakes, back to graupel, back to fatties through the day. OVC skies broke at times for periods of 6/8 cloud coverage making for beautiful light. Mostly no wind with brief periods of light but shifty in direction, predominantly NW. These periods of wind came with light snow transport at the NTL elevations we traveled in.
Snowpack: We experienced a very talkative snowpack today with too many small to medium collapses to count. Most notably was when venturing off the skin track at 10.7k on a sheltered but open NE slope. We experienced a medium sized collapse and watched cracks propagate in steeper adjacent terrain 100+ feet away. Cracks propagated ~150 feet across the steeper 33 degree slope but the slab did not run. We approached the most prominent crack (see photo, ski pole for reference) and dug down to find the failure point (second photo, crack left of probe). The denser snow from the last two storms has formed an approximately 30cm slab resting atop fragile surface hoar. I was able to pull several grains out (see photos). Overall depth in this area averaged ~100cm. The snowpack consisted of 40cm of fist hard facets near the ground from October, 27 cm of 4f slab from around thanksgiving, ~2cm of buried surface hoar and 30 cm of new snow from the last week.

We also saw multiple shooting cracks propagating shorter distances in BTL terrain from ski tips on slopes barely reaching 30 degrees. This sensitive weak layer, where it can be found is very reactive under minimal load. 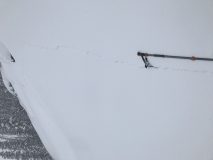 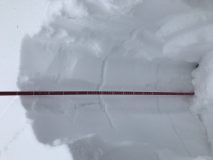