In the late 1800’s, Al Johnson was a mail carrier who traveled between various mining communities in the Crested Butte area. He was known for his courage on skis and held himself to the principle that “the mail must go through.” At roughly 9000 feet, the seventeen miles he traversed from Crystal to Crested Butte are some of the most treacherous winter terrain in the Gunnison Valley. Johnson would strap on mail sacks, which often weighed more than twenty-five pounds, and ski with this burden through snowy, rugged canyons and passes.

It should be noted that the skis of yesteryear used by Al Johnson were nine to fourteen feet in length, four inches wide, and one and a half inches thick. They resembled planks more than skis as we know them today. The wood was very thick under foot and tapered off at both ends. The tips were quite limber and thin so that they could be steamed and bent to the correct curve.

During this period of time, perhaps what was the nation’s first professional skiing circuit was established. Every so often, skiers from the various mining towns would gather for races with cash prizes. For one race in February 1886, Crested Butte put up fifty dollars for prize money and every competitor was charged a dollar entry fee. First prize was twenty dollars, second prize eleven dollars, and third place brought six dollars. Skiers used ski that were approximately eleven feet longand one pole was used like a rudder for steering and stability. Al Johnson was one of the top racers of this area.

Loosely based on the efforts of those early pioneers of ski racing, the Al Johnson Memorial Uphill/Downhill Telemark Ski Race is a unique event. It begins with a mass start of approximately 200 men and women. The race course begins near the top of Mt. Crested Butte, climbs six hundred vertical feet to the top of a ridge, then plunges twelve hundred feet down through extreme skiing terrain. Following the start, there is only one control point – a gate at the top of the uphill section. After passing through this point, racers may choose any route to reach the finish gate which is located at the bottom of the “Last Steep.” Another short uphill section brings racers to the finish line.

What makes this event so challenging is that it must be raced on free-heel telemark equipment. The rules require that each contestant finish with both skis and poles, even if broken. Many a participant has had to carry irreparable equipment across the finish line. What also adds to the fun and uniqueness of the race is that the majority of the racers dress in costume for the race. There are no limits to the creativity there. 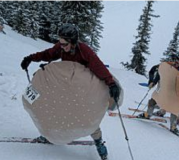