Avalanches: Lots of recent wet avalanche activity around the range. Rustlers Gulch area produced a number of Wet Slab’s the failed in the past couple of days on south and southwest aspects around 12,000′. A couple avalanches were D2 in size.

Weather: Partly cloudy skies in the afternoon with light winds. Felt slightly cooler than the previous day with cloud cover and light winds.

Snowpack: Targeted near treeline slopes that faced northeast, east, and southeast. Moved through terrain between 245pm and 500pm which was a bit too late for peak melt. All sites had developed thin crusts at the surface since the sun had transitioned westward.

On southeast slope at 11,500′ found HS around 150cm with water pooling at the first crust about 40cm down, ECTP 26 beneath the crust with water pooling and above a second crust just a few inches deeper. Another prominent crust was present 50cm above ground with weak, moist 4f snow at the ground. Did not find any ice lens’ lower in profile. Snowpack structure appeared to fit with observed Wet Slab avalanche activity on similar aspects in Rustlers Gulch from the past couple of days.

On an east-facing slope at 11,500′ with HS of 175cm found water pooling on a crust 50cm from the surface. ECTP 21 on the crust with pooled water. Liquid water had just barely pushed beneath this upper crust. Slab structure in the midpack is dense, pencil hard snow.

Shifted to a northeast slope with an HS of 185cm at 11,600′ and found wet snow in just the top few inches of the snowpack. The mid-march interface, 50cm down, was dry on my test wall, but a small portion of the observation wall had an ice lens, but the entire layer had not wetted. I followed ice columns from the surface down and most did not make it to that interface and stopped 10cm short. No results in stability test, ECTX. 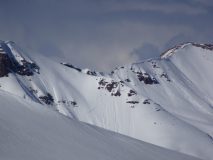 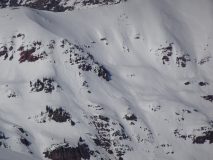 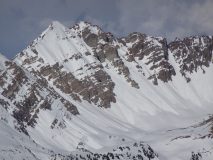