Avalanches:
Weather: Clear other than some high thin clouds. Calm wind.
Snowpack: Getting pretty simple out there. Couldn’t find a persistent slab to worry about, and didn’t encounter a wind slab to worry about either in the one line skied. Feeling around on the BTL to NTL skin up, HS increased from about 60cm to 90cm on average. Those numbers are low because just about everything out there in our area had previously avalanched a couple weeks ago. The snowpack is fast and fun on skis, with ski pen around an estimated 20cm. While boot pen is sinking right through most of the pack. Even the trees had wide propagating avalanches from earlier in the winter. The 12/19 interface will be the new layer of concern as we build back the slabs. The NSF at the 12/19 interface is much more pronounced and weaker below 11,100ft, while increasing in elevation above that, the grains start decreasing in size and are not quite as weak. About 2-3″ of new snow on the 12/19 interface overall.

Poked a hole on the edge of some wind-loaded terrain with a great fetch for westerly winds. Wind-loading had come from the west, but also down the ridge from the northwest. Maybe not the best orientation for the biggest wind slabs to develop out or the last 24 hours. Never the less the windslab was only around 4-5″ thick here and tilt test had it fail within the new snow and just above the NSF. This was a P hard slab in the upper 2 inches and 4f below that. HS here was 130cm as it was above the crown from the natural avalanche activity a couple weeks ago. Probing hear had a more pronounced strong over week structure but its total area was very small. 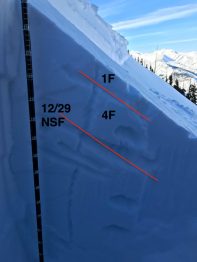 Some poorly drawn lines, but upper snowpack structure summed up. 11,300ft NE wind-loaded terrain. Above the crown of a previous avalanche a couple of weeks ago. 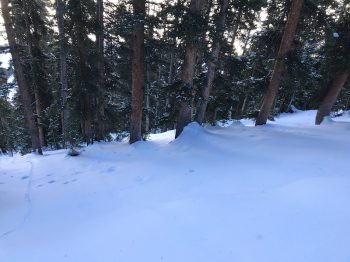 Wide propagating previous avalanches through trees like these with pockets of slightly more open areas. 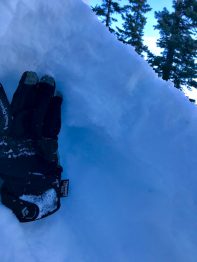 11,000ft. 12/19 interface below a couple inches of new snow. larger grained NSF and weaker than the NSF at higher elevations.