Avalanches: SS-ASc-D1-I on a convex roll in a gully
SS-AMr-D1-I X2 on a small wind loaded roll.

South face of Teo had previously avalanched to its maximum trim line.
Weather: Clear skies, Calm winds with strong solar radiation and warm air temps.
Snowpack: South facing terrain in the brush creek zone has a noticeable shallower snow pack than the northerly portions of the compass. HS: 112cm. Snowpack on these south slopes was shallow due to a vary large avalanche during the early January natural cycle. Multiple large collapses observed on the up track accompanied by shooting cracks up to 30m away. Many of these collapses and cracks failed on the 1/19 interface 25cm down, while others were just the upper wind or sun crust shifting with the weight of a skier while it was softening under the sun. CT11 SC on the 19th interface failed on facets above a melt freeze crust. SW facing slope, 10,700′

At above treeline elevations the persistent slab problem was confined to wind loaded terrain features. The alpine terrain in the surrounding area looked very wind effected with similar terrain management necessary to avoid the avalanche problem.

On the shady side of the compass we observed snow depths hovering around 240cm. The 1/19th surface hoar interface was observed with a 40cm, fist to 4f slab sitting above. ECTN 11 NE aspect 10,500′. Below the surface hoar was a 4f to 1f mid pack.

Facets above a thin crust at the 19th interface were the weak layer in todays triggered slabs. The crust was often very aerated looking like in the shadow of this picture. 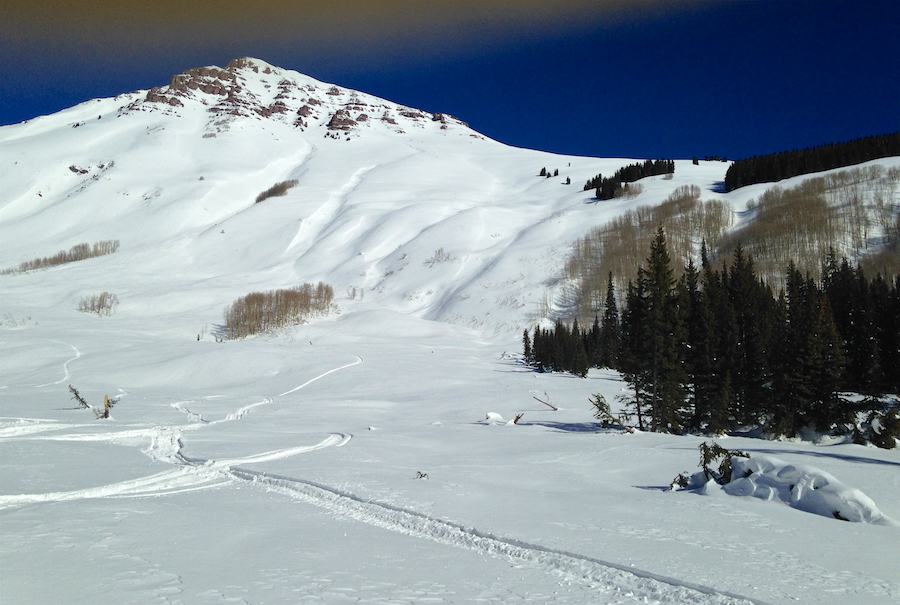 South face of Teo had previously avalanched to its maximum trim line. This is a poor picture for representation, but large trees were down on both sides of the valley at the previous maximum runout. Old Crown looked to have crossed the entire face. the aspen trees on the leading edges of those aspen groves in the middle of the path, had been push over.