Hot dang, there sure was a natural cycle in the terrain to the northwest of Crested Butte around Saturday 11/30. Heres what was visible from travel through slate river corridor and poverty gulch. Some failed early in storm and refilled while others fail late with sharp crowns.

Weather: Cool day with light winds and decent solar. Overall a comfortable day. No transport observed during the day.
Snowpack: Traveled on mainly south and southeast aspects in the poverty gulch area. HS on these aspects was roughly around 50 to 60cm (much of the terrain we moved through was open and susceptible to wind transport so HS across terrain was variable). Much of this terrain was dry prior to Nov 20th storm with only drifted features holding on to old crust or very isolated facet/crust set up. We did experience a couple of collapses but on isolated wind whales. Interfaces from Nov 25th and Nov 29th storm did not appear concerning or produce results in hasty hand tests, no cracking observed. Snowpack on these sunny slopes was surprisingly supportive to skis. 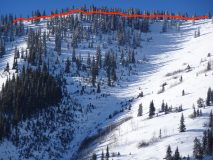 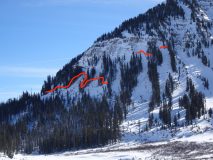 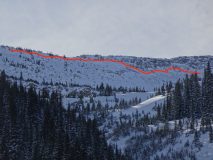 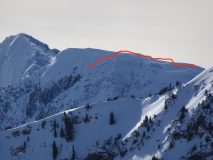 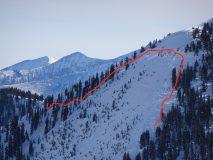