Avalanches:
Weather: Partly cloudy sky and generally calm winds with moderate gusts from the southwest. Enough solar to warm snow surfaces in low angled terrain and southerly facing slopes, mostly below 11,000ft.
Snowpack: Just a dusting of new snow from recent days. So, little change to the slowly developing snowpack. Thin and isolated would be my best short answer description of the current snowpack. Generally thin snow cover with isolated avalanche potential on wind loaded terrain. Snowpack structure is highly variable through the terrain. From bare ground or very thin snow coverage on southerly slopes, wind scoured on many south westerly to westerly slopes, to just a thin snowpack on the other aspects. There is very little to no snow on all aspects below 10,500ft. The deepest snowpack could mostly be found on northwesterly to north facing slopes above treeline that are either protected from the wind or have seen additional wind loading during previous storms. Faceted snow from October is the weak layer at the bottom of the snowpack and can be found where it hasn’t been blown away or previously melted by the sun. Find a thick enough slab on top of this week snow and you’ll have found a potential avalanche problem. These two ingredients looked to mainly line up on wind loaded terrain. Such as, cross loaded gullies on westerly aspects or wind loaded pockets on northerly and easterly aspects. 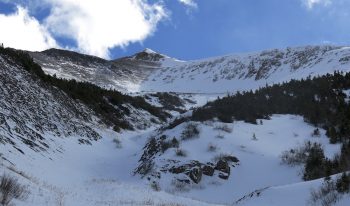 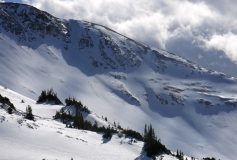 WSC Bowl? Westerly facing bowl near Paradise Divide on Mt Baldy. The deepest and most suspect looking snow coverage was in this area on north to northeast aspects of this bowl. 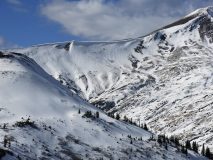 Looking up Rock Creek past Cinnamon Mountain and toward Treasury Mountain. 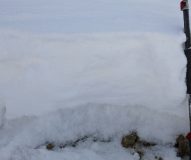 October snow is faceted and week at the bottom of the snowpack. Add enough snow on top of these facets and you will have found the lone avalanche problem. North to northeast aspects were the most suspect with current snow coverage. 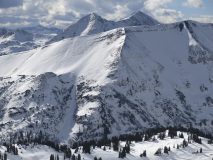 Looking at northeasterly to east facing slopes on Purple Ridge. 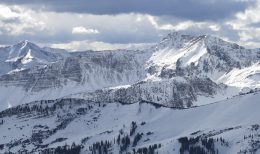