Weather: Filtering low and midlevel clouds and sunshine. Winds near and above treeline were light with occasional drifting off the tallest and most exposed peaks and ridges. Air temps were cool, but solar radiation was strong enough to moisten slopes near 30 degrees or steeper that faced very close to south.
Snowpack: While traveling across steeper southerly slopes the snow surface became moist by midday even above treeline up to 12,400′. 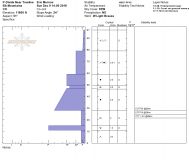 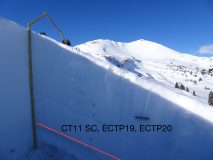