Avalanches:
Got a look at a previously reported avalanche near Evan’s Basin. Debris were fairly fresh so this avalanche likely ran within the last few days. This is a classically wind-loaded terrain feature at 10,700ft. It appeared that the cornice broke and further stepped down and pulled out a slab just under the cornice. The Crown looked to be about 50cm’s thick and probably released near the 2/4 interface and also cleaned to the ground near a rocky cliff thing. SS-N-R1-D1.5. Of note, the slab didn’t propagate widely across the terrain and didn’t appear to produce any shooting cracks on the slope lower down.

Weather: Few clouds in the morning becoming mostly cloudy by mid-day. Low level clouds were moving through with cells producing some light snowfall. New snow accumulation at 3pm was about 1.5 inches. Blowing snow could be seen on ridgelines and upper elevations.

Snowpack: Quick check on low elevation south. No signs to instability traveling on these slopes, even where cross-loaded. Checking out snowpack structure on a 30 degree, cross loaded, south facing slope at 10,600ft. Showed an HS of 135. The 2/4 interface was 6cm thick. There was no collapsing that crust at this time. There was a 45cm 1f slab bonded to that crust, with several thiner crusts near the snow surface that have formed over recent days. 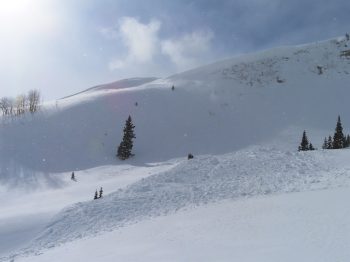 D1.5 on a wind-loaded east facing slope that released in the last few days. 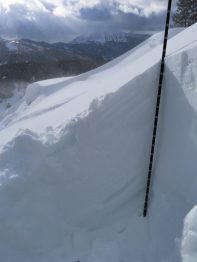 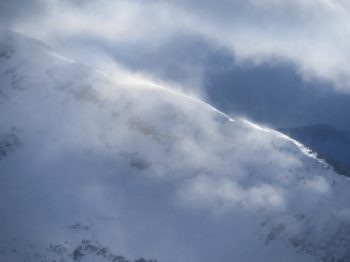